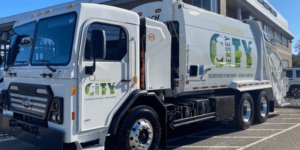 BYD added it had commenced delivery and that the electric trucks have begun operation in regular duty service, with delivery expected to be completed by the end of the year. Jersey City’s Sanitation Equipment Corporation and Climate Change Mitigation Technologies LLC had placed the order as part of the Jersey City zero-emission battery-electric truck fleet project, which will also set an example across the state.

James Sherman, Vice-President and Chief Operating Officer of Climate Change Mitigation Technologies LLC (CCMT), said CCMT and their partners were rolling out “multiple municipal DPW battery-electric refuse truck projects across New Jersey,” without going into detail. The company has, however, been responsible for handling the delivery of ten BYD terminal tractors to the Red Hook Container Terminal in Port Newark, in addition to the refuse trucks for Jersey City. Here Sherman added, “The start-and-stop operation of the diesel refuse truck makes is one of the most inefficient and most polluting trucks operating in New Jersey’s cities and towns; it’s also the reason why they are the ideal candidate for fleet electrification.”

In terms of technology, the BYD refuse trucks are all third-generation and use the company’s lithium iron phosphate batteries. The Jersey City fleet consists of two BYD 8R refuse trucks that have a 25-cubic-yard compactor body, and three BYD 6R refuse trucks that come with a 10-cubic-yard compactor body. The BYD 8R carries a 280+ kWh battery pack and has a range of 600 pick-up plus 60 miles and can be recharged in two and a half hours with DC fast charging, according to the company. The BYD 6R has a 211 kWh battery pack and a range of 80 miles and can recharge in two hours using DC fast charging.

BYD and Jersey City did not detail charging infrastructure arrangements.