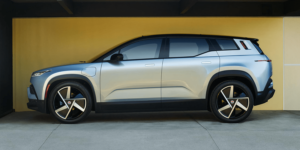 Fisker has just presented its electric SUV Ocean in the design meant for series production along with more details on the technology and the prices of the individual versions. The Fisker Ocean is scheduled to start rolling off Magna production lines in Austria on 17 November 2022.

The Fisker Ocean is to be launched in variants with the designations Sport, Ultra and Extreme. Fisker has now presented the final appearance of the electric SUV at the Los Angeles Auto Show. It would appear from the press photos that many design features from the pre-series have made it into the final version. But first, let’s take a look at the individual variants of the vehicle with their respective equipment features.

First, there is the basic Sport variant with a single-engine 200 kW front-wheel drive, which will cost 37,499 US dollars before subsidies. According to Fisker, this variant is fitted with LFP cells supplied by CATL and is therfore expected to achieve an EPA range of 250 miles (equivalent to around 400 kilometres). The electric vehicle takes 6.9 seconds to get from 0 to 100 km/h.

The Ultra (from 49,999 US dollars) and Extreme (from 68,999 US dollars) versions each have a twin-motor all-wheel drive and CATL cells with NMC chemistry, which are said to offer EPA ranges of 340 and 350 miles (equivalent to 547 and 563 kilometres) respectively. The Ocean Ultra has a power output of just under 400 kW, the Ocean Extreme around 405 kW, which is reflected by the acceleration to 100 km/h in 3.9 and 3.6 seconds respectively.

Fisker has also announced that the first 5,000 cars produced will be called Fisker Ocean One and will also cost 68,999 US dollars. These will come with “additional standard equipment, including 22-inch F3 SlipStream wheels”.

All vehicles from the base to the top to the special model have silicon carbide inverters on board. The Ocean will have bi-directional charging capability, meaning that it can feed electricity back from its battery to other vehicles, homes or the grid (V2V, V2G and V2H).

The Ocean’s main design features include flared front wheel arches, 20-inch wheels (22-inch wheels are optional), a windscreen that blends seamlessly into the roof, and slim lighting elements. For higher trim levels (except Sport), this large electric car comes in ‘California Mode’, which creates a “convertible-like open-air experience” at the touch of a button. The Fisker Ocean Extreme and the Fisker Ocean One are also offered with a solar roof, which “under ideal conditions provides an additional range of 2,000 miles per year”, the equivalent of around 3,200 kilometres.

The Fisker Ocean Sport will have two driving modes (called ‘Earth’ and ‘Fun’), while the Ocean Ultra and Extreme will also have a ‘”Hyper mode’ and both the Ocean Extreme as well as the One will also have an off-road mode. Apart from the Sport variant, the Ocean also has a smart torque vectoring system on board to improve performance and safety.

Inside, the Fisker Ocean is designed for five passengers. The interior is completely vegan and sometimes made of recycled materials. The volume of the audio system as well as the heating and air conditioning can also be controlled from the rear row of seats. The sound system can be equipped with up to 16 speakers, 500 watts and a 20.5-litre subwoofer. Fisker also describes as a highlight the 17.1-inch central screen in the cockpit, which rotates from a standard portrait format while driving to landscape after parking.

In terms of connectivity, the Fisker Ocean supports over-the-air updates. Also on board is a driving assistance system called Fisker Intelligent Pilot, which is designed to “anticipate and avoid accidents” by processing sensor information. Here, Fisker refers to radar, ultrasonic sensors and cameras.

The Fisker Ocean is to be offered for sale at the end of 2022, reservations have been possible for some time for a deposit of 250 dollars. There is also to be a leasing option whereby the Fisker Flexee Lease resembles a subscription model rather than a conventional leasing contract. The Fisker Ocean Sport Flexee Lease starts at $379/month with a one-time initiation and activation fee of $2,999. The company says it will announce the conditions for other equipment variants at a later date.

For Germany, Fisker already announced a price “of less than 32,000 euros including taxes and EV-related subsidies” in an earlier announcement. Here, the local purchase premium has already been deducted.

Although the Ocean will be manufactured by Magna in Austria, Fisker will be making an electric car with Foxconn under the project name PEAR. At the former Lordstown plant that Foxconn recently purchased, Foxconn will initially build 150,000 vehicles a year for Fisker and start production by 2024.

After these two electric vehicles, Fisker revealed last month that it is planning two more electric models by 2025. According to company founder Henrik Fisker, these two upcoming new vehicles – after the Pear and the Ocean – will be positioned significantly above the Ocean. Although both cars are to be developed in the UK by a team led by former Aston Martin engineer David King, Fisker described the chance of manufacturing on the island as “very slim”.