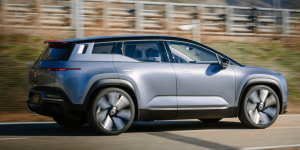 Contract manufacturer Magna has announced a cooperation with Fisker. This includes the production of the electric SUV Ocean, scheduled to start in the fourth quarter of 2022. This also makes it clear that Fisker Ocean will not be based on Volkswagen’s MEB.

In the summer it was announced that Fisker Inc. was negotiating with Volkswagen on the use of the MEB for the series version of the Ocean. Henrik Fisker repeatedly announced that the company wanted to concentrate on the design, software and digital functions of the e-cars, not on capital-intensive production. In August, however, Henrik Fisker stated that talks with VW had been “paused”.

With Magna’s announcement, it is now clear that the negotiations with Volkswagen did not come to fruition, at least not with regard to the use of the MEB platform. Instead, Ocean is to use Magna’s electric vehicle architecture in combination with the “Fisker-Flexible Platform Adaptive Design” (FF-PAD). Thus the two companies want to create “a lightweight, aluminium hybrid-based FM29 platform for the Fisker Ocean”.

Although Magna is a Canadian corporation and Fisker Inc. is an American company, the Fisker Ocean is to be manufactured “initially exclusively” by Magna in Europe. An exact plant has not specifically been mentioned, but Magna operates a larger production facility in Graz, Austria.

“We are very happy to be able to work with Fisker on such an exciting, sustainable product and to see what additional opportunities this cooperation may bring,” said Swamy Kotagiri, President of Magna. “This is a great example of our strategy to leverage our strong portfolio to scale for future mobility needs and utilize our full vehicle engineering and manufacturing capabilities. This is a unique competitive position for us, particularly with new mobility players and OEMs seeking to expand their electrified offerings.”.

The cooperation also goes beyond a pure development joint venture and contract manufacturing: Magna will receive warrants from Fisker to purchase shares, which currently represent approximately six per cent of Fisker’s equity.

Henrik Fisker stated that Magna was chosen “after a thorough review of several options” – also taking into account the company’s own product and technology strategy. “In addition, the fact that Magna has such a committed position in our project shows just how deep this collaboration is,” Fisker said.

Update 18 December 2020: Fisker and contract manufacturer Magna have now reached a final agreement on the platform and production of the Fisker Ocean. The model will use a modified version of an electric car platform developed by Magna and is scheduled to go into production from the fourth quarter of 2022. Fisker plans to unveil a production-ready prototype by next summer. The eventual top-of-the-line “Ultra Long Range” version of the electric SUV is expected to offer a range of “more than 350 miles” (563 kilometres). Worldwide paid reservations for the model currently total more than 10,400, according to Fisker.

Update 17 June 2021: Fisker and Magna have now finalised their announced contract manufacturing agreement. Production of the Fisker Ocean at Magna’s Graz plant is scheduled to start on 17 November 2022. Fisker plans to present the production version of the electric SUV at the Los Angeles Auto Show in November 2021.