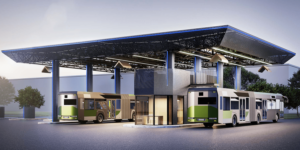 Poland’s electric bus manufacturer Solaris is building a charging park on its premises in Bolechowo near Poznan and says it would become one of the most innovative of its kind in Europe when opening in 2022. The Solaris Charging Park will feature various charge systems, including bi-directional.

Solaris expects the new facility to enable them to test a variety of solutions and “to respond precisely to the growing demand for electric buses from European operators.” The manufacturer in today’s announcement claims to have delivered several hundred e-buses to almost 30 towns and cities across Europe.

However, the Solaris Charging Park is a new investment and will cover an area of 5,000 m2. There will be four stands for vehicles under a roof equipped with photovoltaic panels to generate renewable energy. While expecting to test new solutions, Solaris also wants the Charging Park to serve clients by showcasing innovative solutions for them to see.

However, these won’t be made by Solaris. Instead, the company will install charging systems made by three different suppliers but did not disclose any names. However, there are details on technology, with one charger featuring eight charging points and power output ranging from 150 kW to 600 kW. Three vehicles can charge here at the same time, so Solaris.

The company also stresses that the system was compatible with all connectors available on the market and can connect to both buses and trolleybuses. What is more, it supports Vehicle-to-Grid (V2G) functionality. In Poland, the Solaris Charging Park will be the first bidirectional charging park, and Solaris adds that it will test to use vehicles as mobile energy storage facilities.

The charging site will also boast a charger with four charging points with a total power output of 300 kW. Two socket outlets and one conventional and one inverted pantograph make up the mix in this case. The company will also install two independent plug-in chargers with a power output of 150 kW each, again with V2G capability. A central management system will allow the operation of the Charging Park to be monitored and remotely controlled, Solaris says.

The company further expects the construction work to be completed by the end of this year for the Charging Park to be fully operational by mid-2022.

Tritium to deploy over 500 DC-chargers for EVCS network