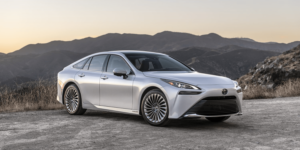 Toyota has announced pricing for the 2022 Mirai in the US, expected to arrive at Toyota dealerships this December. Prices for the fuel cell electric vehicle start at $49,500, excluding a ‘Dealer Processing and Handling Fee’ of $1,025.

Toyota’s newest model year for their popular FCEV has improved a number of technological features, such as higher safety ratings thanks to the ‘Toyota Safety Sense 2.5+’ system, which includes a whole suite of safety features from Pre-Collision System with Pedestrian Detection to Road Sign Assistance.

The Mirai’s new powertrain is built on the rear-wheel-drive GA-L platform. According to the manufacturer, “the second-generation of the Mirai’s more powerful fuel cell system provides a more engaging driving experience than its pioneering predecessor”. Additionally, the RWD configuration also allows for increased hydrogen storage compared to the first-gen, front-wheel drive Mirai. This allows for a EPA Estimated 402 miles of range on the XLE grade version.

There is a more expensive version, named ‘Limited Grade’, starting at $66,000. The differences between the two vehicles are mainly cosmetic, although the Limited Grade also features additional software options. In addition, both models will receive up to $15,000 in free hydrogen fuel upon purchase.

To compare, the second generation of the 2021 model year of the Mirai actually had a range of 650 kilometres, however this was according to Toyota themselves, while the EPA is usually more strict with their ratings.