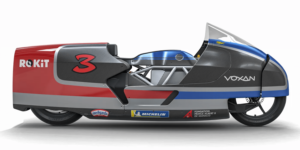 The new model year of the Wattman electric motorcycle is set to build upon the successful records of its predecessor model. The Venturi Group subsidiary Voxan is thus setting to expand the horizon of what is possible with electric motorcycles. To recap, the previous model featured 270 kW of power and a torque of 970 Nm, coupled with a 15.9 kWh lithium-ion battery. With a claimed range of 170 km, the Voxan Wattman was nonetheless designed to boost the bike to maximum speed in just a few minutes – Voxan spec says 3.4 seconds to go from 0-100 and 9 to reach 160 kph. Eventually, the bike set a record of 408 kilometres per hour.

The first difference between the model years is the newly reduced weight: the new Wattman weighs in at under 300 kilos, allowing it to compete in a different category. The Mercedes EQ Formula E powertrain delivers 320 kW of power and offers torque of 1,360 Nm, notably up from the previous version. Adaptation of the dimensions of the bike were also undertaken to improve stability and air penetration. Project lead Louis-Marie Blondel explained the original bike’s main design focus points as “drag (aerodynamics) and stability at high-speed” done by employing “the smallest possible projected area, but with a long wheelbase and a large rake, so the rider would be positioned as low as possible.” This design philosophy has been pushed further in the model update.

While no range rating or recharging data was mentioned, the company intends to begin testing the new bike at Space Florida’s Launch and Landing Facility at the Kennedy Space Center “certainly within the first six months of 2022”. Initially, testing for the original Wattman was supposed to begin in the Bolivian salt flats this year, but was postponed due to the pandemic. Last year’s 408 kph record instead was done on the Châteauroux airfield in France.