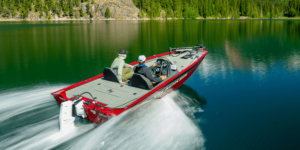 General Motors has acquired a 25 per cent stake in Pure Watercraft, a Seattle-based developer of all-electric boating solutions. Both companies intend to develop and market battery-electric watercraft using GM technology.

The exact amount of the carmaker’s investment in Pure Watercraft is not disclosed in GM’s announcement. Nor were concrete projects and joint products announced yet; according to GM, these will be announced at a later date.

According to founder and CEO Andy Rebele, Pure Watercraft hopes that the cooperation with the carmaker will lead to “significant technological advances in range and charging, while achieving series production”. For the battery-electric watercraft, GM technology is to be integrated “into a variety of applications”.

Exactly where that will be is not yet mentioned. GM has an electric drive kit for automotive use with its Ultium Drive units, but also battery technology through its Ultium Cells joint venture. From partner Pure Watercraft, the GM announcement praises the Pure Outboard engine with its “breakthrough efficiency”. Production of these engines could be scaled with GM expertise – the memo emphasises GM’s “engineering, supply chain and manufacturing capabilities”.