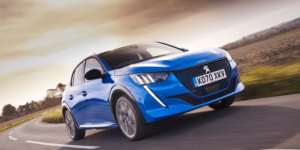 From the beginning of 2022, the electric versions of the Peugeot models 208 and 2008 are to receive a higher WLTP range – of up to 22 kilometres. This is made possible by changes to the software, but also to the hardware.

The Peugeot e-208 will then offer a combined WLTP range of up to 362 kilometres and the Peugeot e-2008 up to 342 kilometres, which is an increase of 22 kilometres in each case. In everyday life, it should be even more, as Stellantis informs us – at temperatures “close to zero degrees Celsius”, up to 40 kilometres more should be possible in city traffic.

The key data of the drive itself remain unchanged: the 100 kW electric motor from Vitesco and the 50 kWh battery. Nevertheless, there is an innovation in the drive itself: A new gear ratio – i.e. classic mechanics – is supposed to optimise the range during “road and motorway trips”.

Another simple measure is different tyres on delivery: the tyres on the 16-inch aluminium rims on the e-208 and the 17-inch ones on the e-2008 will in future be A+ grade. Their lower rolling resistance ensures greater efficiency.

The third measure is more eMobility-specific: from 2022, not only will a new heat pump be installed, but it will also be coupled with a humidity sensor placed at the top of the windscreen. Not only will the heat pump itself be more efficient, but the software will also be able to use the data from the sensor to better control the heating and air conditioning.

In particular, the recirculated air in the interior should be better detected and controlled, as Stellantis writes. “The information communicated by this sensor makes it possible to control the air recirculation in the passenger compartment more accurately and ultimately to protect the amount of energy contained in the battery when heating and maintaining the temperature inside the vehicle,” it says. “This latest advance is particularly noticeable at low outside temperatures.”

How much the individual measures individually contribute to the range increase is not clear from the statement. A retrofit for the more than 90,000 vehicles produced of the two models is also not mentioned, but is very unlikely based on the larger interventions – such as the transmission ratio.

The measures for the new model year are not Peugeot-specific: DS Automobiles also reports a range increase for its purely electric DS 3 Crossback E-Tense. Here, the WLTP range increases by almost seven per cent to up to 341 kilometres. DS also mentions the same changes, but in some cases formulates them a little more elaborately. For example, it says of the new gear ratio: “As a result of further development and constant discussion with the Formula E team supported by DS Performance, the gear ratio has also been perfected to improve the efficiency of the DS 3 Crossback E-Tense.”

Changes for the Opel Corsa-e and Mokka-e have not yet been confirmed via Stellantis announcement.