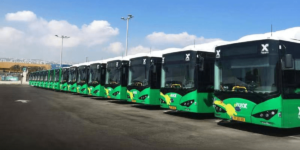 Egged, the largest bus company in Israel, has ordered 100 purely electric 12-metre buses from BYD. These are to be delivered before the end of 2022 and will be used in Haifa. For the Chinese bus manufacturer, this electric bus order is the largest from to date Israel.

The order is part of a larger Israeli tender for 200 buses supported by the national transport authority. Public transport operator Egged has chosen BYD as its supplier in this framework. According to the Chinese company, Egged has been a customer since 2017 and already has 24 BYD electric buses in its fleet that operate in Haifa and Jerusalem.

The new electric buses are to be delivered before the end of 2022 and will strengthen the electric fleet in Haifa. BYD says that its new generation of electric buses that will be bound for Israel will be equipped with iron-phosphate batteries with longer service life and increased energy density for an even longer range. The battery pack comes to 422 kWh of energy content and is expected to provide up to 400 kilometres of range.

“This is an important moment for the people of Israel and public transportation in our country. It is a clear signal of our commitment to transitioning to zero-emission transportation for a better environment for Israeli residents. We have great confidence in BYD’s pure-electric eBuses for providing our passengers with reliable, safe and comfortable transportation.”

BYD says there are currently 37 of their electric buses in operation across Israel in the cities of Haifa, Jerusalem, Tel Aviv, Modin and the Sharon region.

In August this year, the Israeli government increased the amount of funding to go towards electric buses. The goal is to electrify the entire bus fleet by 2025.