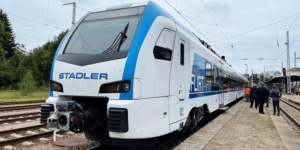 DB Regio has ordered 44 battery-electric multiple units of the type ‘Flirt Akku’ from Stadler for use in the Pfalz network. From December 2025, the first of the 44 multiple units are to go into passenger service on eight routes and replace the diesel trains currently in use by the end of 2026.

This article has been updated. Please continue reading below.

The Flirt Akku was presented by Stadler in October 2018 and is particularly suitable for networks in which electrified sections alternate with passages without overhead lines, as will be the case in the future in the Pfalz network. On the electrified lines, the trains run under contact wire-like classic electric railcars and charge the batteries at the same time. “The operational range in battery mode is at least 80 kilometres – Stadler has already demonstrated 185 kilometres in battery mode during test journeys,” Stadler informs. In the Palatinate network, the longest section of track without overhead lines will cover around 48 kilometres after the completion of the planned partial electrification.

The trains now ordered by DB Regio are 55 metres long and have extra-long carriages “in order to enable the highest possible passenger capacity for the heavily frequented routes”, according to an accompanying statement. Specifically, a total of 325 passengers can be carried, including 172 in seats – 16 in first class and 156 in second class. According to the Swiss manufacturer, the two-part vehicles will successively go into passenger service on eight Southern and Western Palatinate railway lines from the timetable change in December 2025.

While DB Regio acts as the coordinator of the order, the “responsible authorities in Rhineland-Palatinate, Saarland and Baden-Württemberg” are ultimately behind the order. Specifically, these are the Zweckverband Schienenpersonennahverkehr Rheinland-Pfalz Süd, the Saarland Ministry of Economics and the Baden-Württemberg Ministry of Transport.

“We are already the most climatefriendly mobility company in Germany,” expresses Maik Dreser, Chairman of the Regional Management DB Regio Mitte. “And by 2040, we at Deutsche Bahn want to be climate neutral. Alternative drives and fuels are an essential part of achieving this goal. We are therefore absolutely delighted that the commissioning authorities responsible for the Palatinate network have opted for environmentally-friendly technology and that we will be able to put this technology into operation in the new transport contract.”

For Stadler, this is the second major order for the Flirt Akku from Germany. In 2019, the Schleswig-Holstein local transport association had already ordered 55 units of the battery-powered multiple unit. In principle, the Swiss company offers the Flirt model with electric, diesel or bi-modal drive, as well as with the aforementioned battery drive or hydrogen. In total, more than 2000 Flirt vehicles have been sold to date, according to the company. Incidentally, the first customer for an H2-Flirt is the American San Bernardino County Transportation Authority (SBCTA).

The market for battery-electric multiple units is shared by a few large players. Among them, besides Stadler, are the manufacturers Alstom and Siemens. The latter recently won the contract to supply 31 battery trains from Niederbarnimer Eisenbahn (NEB). The Mireo Plus B trains are to be put into service as regional trains in the Berlin-Brandenburg metropolitan region from December 2024.

DB Regio has ordered another round of battery-electric trains of the type ‘Flirt Akku’ from Stadler. From the end of 2026, Deutsche Bahn will use these 14 Flirt Akku trains to replace diesel trains on the lines in the so-called H-Netz Warnow in Mecklenburg-Western Pomerania.

According to Stadler, orders for 113 Flirt Akku trains have been received to date. In addition to the 14 multiple units from the current order and the above-mentioned 44 units for the Pfalz network, the Schleswig-Holstein public transport association already ordered 55 Flirt Akku units in 2019.