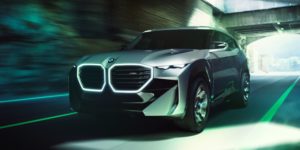 With the Concept XM, BMW M has presented a preview of the most powerful car ever built in series by BMW’s performance brand, the production of which will start at the US plant in Spartanburg at the end of next year.

The BMW XM will be available exclusively as an M and exclusively as a plug-in hybrid. In the Concept XM, the PHEV drive combines a V8 with an electric motor and generates a peak output of 550 kW and a maximum torque of 1,000 Nm. The purely electric range is given as up to 80 kilometres. BMW does not yet provide further details on the PHEV drive – such as battery size, charging power or the positioning of the e-motor in the drivetrain – in the communication on the concept car.

Since series production has already been decided for the end of 2022, the Concept XM is considered to be very close to series production – even if the mighty radiator grille with illuminated frame and the extremely narrow headlights are still more reminiscent of a concept model. However, BMW writes: “The BMW Concept XM shows the new front design for BMW’s future luxury class for the first time. In addition, we see an enormously progressive and independent interpretation of the design of the BMW X models.” The Concept XM is also emphatically independent at the rear and in the interior.

“The BMW Concept XM represents a complete re-imagining of the high-performance car segment,” says Franciscus van Meel, Managing Director BMW M GmbH. “It underlines the ability of BMW M GmbH to break with established conventions and push boundaries in order to offer fans of the brand the ultimate driving experience. The series-production car – the first pure BMW M model since the legendary BMW M1 – also shows how we are approaching the step-by-step electrification of our brand.”

The XM will be produced in Spartanburg in parallel with the large X7 combustion SUV, both of which are based on BMW’s CLAR platform and have a wheelbase of 3.10 metres. So far, there is no hybrid version of the X7, although it was exhibited as a concept car at the IAA 2017 as the BMW X7 Concept iPerformance. The X7 M50i is already equipped with a 390 kW V8 engine, which is also likely to be used in the XM.

While the published pictures only show that the charging port is installed in the side sill between the front wheel and the driver’s door, as in other BMW PHEVs, BMW does not provide any further details on the electrical part of the powertrain. Given the battery from the X5 plug-in hybrid (21.5 kWh) and the electric range of 80 kilometres, we estimate that the power storage in the XM must be at least 20 kWh. The power of the electric drive system will be between 88 and 110 kW, according to the article. Final data will probably not be available until 2022, when BMW presents the series version.