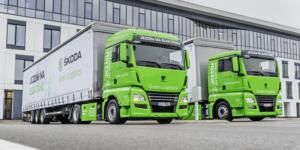 Skoda is now testing two electric tractors for internal transport in Mlada Boleslav, in the Czech Republic. These will replace tractor units with diesel engines on their respective routes by May next year. The purchase of further electric trucks is planned.

The two tractor units have already been in test operation since 1 October, as the VW subsidiary has now announced. In the next step, specially made, shortened semi-trailers will transport BEV batteries through the Mlada Boleslav plant from June 2022. For this purpose, the semi-trailers will be equipped with conveyor technology for automatic loading and unloading with and from pallets.

The experience so far has apparently been positive. Skoda production board member Michael Oeljeklaus has said that after the successful test run with the two purely electric tractor units, the company is rapidly converting the fleet to purely battery-electric trucks for internal plant transports.

Oeljeklaus, who is also responsible for logistics at Skoda, wants to transport components purely electrically in future, and not only within the plant. He explains that they also want to provide incentives for their local suppliers. This means that in the medium term, the envisage that all components delivered by truck from the immediate vicinity of our plant locations will reach their production lines with zero local emissions.

According to the published press photo with the company’s announcement, the two tractors are Framo models. These have a range of 80 kilometres, and a charging time of 4.5 hours – sufficient for in-plant use, as the distances here are short. For the planned deliveries from outside, however, a truck with a larger battery would probably have to be used.

Skoda has not yet said exactly how many electric trucks the company aims to put on the road in and around the plant in the future and how high the targeted CO2 savings will be.