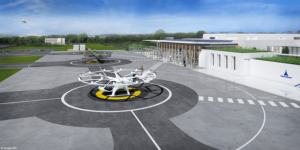 Several French aviation and transport industry players have opened a test centre for sustainable urban air mobility at the Pontoise-Cormeilles airfield just outside the French capital Paris. Trials of eVTOLs from several manufacturers are now beginning there.

The on-site tests are to be realised together with the French civil aviation authority. The declared goal of those involved is to create at least two flight routes for the 2024 Olympic and Paralympic Games. The driving force behind the project is the Paris Region (through its economic development agency Choose Paris Region), the ADP Group (“Aéroports De Paris”) and the RATP, i.e. the state operator of local public transport in Paris and the surrounding area.

According to a statement by the ADP Group, “Thanks to the tests planned by numerous manufacturers over the coming months in Pontoise, the partners, along with the DGAC (French civil aviation authorities), will study different scenarios for pre-commercial services for the 2024 Olympic and Paralympic Games”. The focus is specifically on two routes: The first is to run from the Paris-Issy-les-Moulineaux heliport to Saint-Cyr airfield, the second from Paris-Charles de Gaulle and Le Bourget airports to the city of Paris – at a location yet to be determined. Volocopter, Airbus, Vertical Aerospace, Ascendance, Lilium and Joby Aviation are named as cooperating eVTOL manufacturers.

The release goes on to say that the development of a new urban air mobility (UAM) industry in the Île-de-France region was launched in September 2020 through a call for expressions of interest. Thirty manufacturers had then been selected to complete tests in the areas of modelling and noise measurements, flight phases and integration into the airspace, maintenance and recharging operations, and passenger routes, he said.

“At the 2019 Paris Air Show, Groupe ADP, RATP Group and Airbus haves announced the launch, with the support of the Ministry of Transport, of a study for the implementation of an Urban Air Mobility service for the 2024 Olympic Games. I’m delighted to see one of the concrete results of this partnership being implemented here in Pontoise, and the whole ecosystem that is coming together,” expressed Jean-Baptiste Djebbari, the French delegate of the Minister of Transport, at the inauguration of the test centre.

The French state is committed to funding the UAM sector: according to Djebbari, the Council for Civil Aeronautics Research (CORAC) has already allocated almost 25 million euros for the development of air taxis – as well as supporting projects with the DGAC and the Agency for Innovation in Transport. “Everything is coming together: Partnerships, innovation, test sites, regulations, funding. All the ingredients for success are there, we just need to put them into action,” he said.