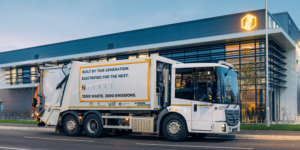 British company Lunaz announced a 400% increase in its re-manufacturing and electrification capacities in Silverstone, Buckinghamshire. The new facility is planned to open with 300 technicians and engineers in 2022.

The new facility will be the global headquarters and R&D hub for Lunaz which upcycles and re-engineers specialist industrial fleet vehicles to factory new standard and converts them to the Lunaz proprietary electric powertrain. The new facility will have the capacity for up to 1,110 remanufactured and electrified vehicles per year and will be the largest of its kind in the United Kingdom so far.

“Ours and previous generations built billions of vehicles. Now is the time to realise the potential of remanufacturing to break the replace-with-new cycle by electrifying them for future generation,” said David Lorenz, the founder and CEO of Lunaz. He also elaborated why his company is taking a conversion approach, rather than designing their own vehicles from the ground up: “The approach represents a comprehensive process of remanufacturing. Every component is upcycled to a factory standard with a clear focus on reducing waste. This is a clear answer to the pressing global requirement to reduce carbon emissions. Lunaz employs a remanufacturing approach, because it preserves nearly 80% of the embedded carbon within a vehicle, therefore breaking a replace-with-new cycle which sees millions of tonnes worth of functioning vehicles end up in landfill every year.”

The vehicles announces thus far to be available for conversion by Lunaz include classic cars such as the Range Rover, Rolls Royce and, most recently, the Aston Martin DB6. New to the lineup is an EV refuse truck, which Lunaz says can save fleets with up to 40% on prices over new EV equivalents.