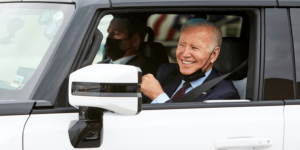 The Biden administration is driving plans to increase electric transport across the US. Advances such as replacing all Government vehicles with electric ones have resulted in a new executive order. The President demands all light-duty vehicles acquired by the government to be emission-free by 2027.

And there is more – by 2035, this will affect all new vehicles so that agencies will buy battery-electric or fuel-cell powered vehicles exclusively. And a lot of them – the US government owns more than 650,000 vehicles and purchases about 50,000 annually. However, as of summer 2020, the fleet had 3,215 electric vehicles, a minuscule 0.5 per cent, according to figures collated by Reuters citing data from the General Services Administration (GSA).

The GSA will also hold a list of eligible zero-emission vehicle options per vehicle class. While not specifically laid out this time, the initial plans required vehicles to be built in America. What is clear is that government agencies with a fleet comprising at least 20 vehicles are now required to “develop and annually update a zero-emission fleet strategy,” according to the executive order. The strategy must further include optimising fleet composition as well as charging infrastructure.

When Biden first laid out the policy in January 2021, Reuters estimated that fleet electrification could cost the government around $20 billion. In today’s news, the agency added, the government spent $4.2 billion on vehicle costs, including $730 million for fuel in 2020.

The Alliance for Automotive Innovation, a trade group representing General Motors, Toyota, Volkswagen AG and others, welcomed the effort.

However, civil society organisations would have liked to see the US move faster. “Waiting 14 years to do it is an awfully long time when we have some electric vehicles already, and companies are trying to decide now whether to make just promises or actually make electric vehicles,” Dan Becker, director of the Safe Climate Transport Campaign at the Center for Biological Diversity told Reuters.

In his infrastructure plan, Biden has also resisted calls to endorse California’s plan to end the sale of new light-duty gas-powered vehicles by 2035.

Charging infrastructure gets the go-ahead

There has also been news in terms of the promised charging infrastructure. Biden, in April of this year, had promised to invest 15 billion dollars in constructing a national network of 500,000 charging stations for electric vehicles.

A combination of grant and incentive programmes for state and local governments and the private sector was to accelerate the deployment of charging stations at multi-unit housing, public car parks, municipalities and fast-charging stations along the nation’s roads.

To progress the latter target, the newly founded National Electric Highway Coalition brings together 53 of the country’s energy providers. The goal is to equip America’s main traffic arteries with fast-charging stations for electric vehicles, so the government focuses on highways first.

The coalition partners are no strangers as the new organisation is a merger between the Electric Highway Coalition and the Midwest Electric Vehicle Charging Infrastructure Collaboration with other utilities now making it a national effort in which the Edison Electric Institute (EEI) is taking the lead.

In today’s statement, the EEI claims 51 investor-owned electric companies, one electric cooperative, and the Tennessee Valley Authority had joined the coalition. The organisation added it was committed to providing EV fast charging ports “that will allow the public to drive EVs with confidence along major US travel corridors by the end of 2023.” As in previous communications, concrete specifications are lacking. However, earlier releases included “sending electric car drivers back on the road in 20 to 30 minutes”, so we can assume this requires ultra-rapid chargers.

The EEI further estimates that more than 100,000 fast-charging stations will be needed to support the projected 22 million EVs on US roads in 2030.

Biden in August launched a plan to make half of all new vehicles (partially) electric in the US in 2030. That, however, included plug-in hybrid-electric models, plus the 50% target is not legally binding.

At the same time, the President wants Congress to approve up to $12,500 in tax credits for private electric vehicle purchases, including $4,500 for buyers of union-made EVs. This plan, however, faces resistance from foreign carmakers and has yet to be decided.

On the whole, Biden’s executive order also called on federal government operations to reduce emissions by 65% by 2030. The government will seek to consume electricity only from carbon-free and non-polluting sources on a net annual basis by 2030 and have net-zero emissions by 2050.

An executive order sets state mandatory requirements for the executive agencies that have the effect of law. While Congress may overturn an executive order by passing a bill that blocks it, the President can veto it, and the current administration holds the majority.