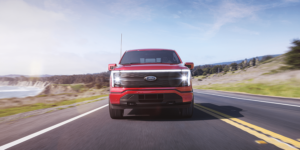 The car companies General Motors, Ford and Stellantis have announced in a joint statement that they want to achieve between 40 and 50 per cent of their sales in the USA with BEVs, PHEVs and FCEVs by 2030. This sales target was apparently wrested from the carmakers by US President Joe Biden.

The automakers wrote their “recent product, technology, and investment announcements highlight our collective commitment to be leaders in the U.S. transition to electric vehicles”. It said this represents a “dramatic shift” from today’s US market that “can be achieved only with the timely deployment of the full suite of electrification policies committed to by the Administration in the Build Back Better Plan”.

The joint memo from the automakers was released ahead of a White House event. US President Joe Biden is scheduled to discuss electric cars and fuel economy standards with the heads of GM, Ford and Stellantis. “When I say electric vehicles are the future, I’m not joking,” Biden sent via tweet ahead of the meeting. Later this week, the government will present its revised fuel economy requirements for new cars starting with the 2026 model year.

The White House itself published a fact sheet, according to which Biden will sign an executive order that sets the goal of a 50 per cent new registration share of zero-emission vehicles by 2030 – however, the White House subsequently lists plug-in hybrids, which are only partially emissions-free, alongside electric cars and fuel cell vehicles.

The measures Biden intends to announce are not only intended to increase the impact of the infrastructure plan, but also for the purpose of “positioning America to drive the electric vehicle future forward, outcompete China, and tackle the climate crisis”.

The target of 40 to 50 per cent BEV, PHEV and FCEV of US sales by 2030 proclaimed on the part of the manufacturers will not lead to a new plan for each of the groups – judging by what they have said so far. At the presentation of its electric strategy at the beginning of July, Stellantis announced its intention to achieve 40 per cent of its sales in the USA with “Low Emission Vehicles” (LEV) by 2030. LEVs are a triad of battery-electric cars, hydrogen fuel cell cars and plug-in hybrids. To this end, not only US brands like Jeep are increasingly electrified, but also the performance brand Dodge and the pickup brand Ram will offer electric cars from 2024. However, the recent announcement that the Alfa Romeo, Lancia and DS brands will also switch to electric powertrains will not help Stellantis in the US.

While Stellantis already meets the target with its current plans (of course, it remains to be seen how sales will actually turn out in 2030), Ford has so far announced a 40 per cent share of pure electric cars globally by 2030. In Europe, by the way, the brand only wants to sell pure electric cars in this target year – with 100 per cent BEV in Europe, the other sales regions including the USA are likely to be below 40 per cent in the plans so far.

General Motors is aiming for 40 per cent BEVs in global sales as early as 2025, five years earlier than rival Ford. Since the Chevrolet Bolt and its offshoot Bolt EUV are currently virtually the sole entertainers in the US offering of pure electric cars, the US car giant is betting heavily on the coming model offensive with vehicles based on the Ultium platform. General Motors currently has no interim target for 2030, but by 2035 cars and commercial vehicles up to 3.8 tonnes are to be electric only – whether with batteries or, in some segments, with hydrogen.

Whether the announced target can be achieved is up to the companies, but also to consumers and politicians. GM, Ford and Stellantis are already playing the ball back to them – they need purchase incentives, a comprehensive charging network, investments in research and development, and incentives to build up production and supply chains in the USA. To this long (and presumably expensive) wish list, the companies add the following sentence: “We look forward to working with the Biden Administration, Congress and state and local governments to enact policies that will enable these ambitious objectives.”

One day after GM, Ford and Stellantis, Nissan is now following suit with a target for the US market: The Japanese carmaker wants more than 40 per cent of its sales in the US to come from all-electric models by 2030. “It is critical that industry and government work together to drive consumer adoption of electric vehicles, as well as support manufacturing and infrastructure to bring the next generation of electrified mobility to the road,” says Jeremie Papin, CEO of Nissan Americas. “First and foremost, we want more American consumers to enjoy the benefits of electrification: lower emissions, lower operating costs and much more fun to drive.”

Only: Nissan will not achieve the goal of the Executive Order signed by Biden even with the new plans. As reported above, the US president is aiming for a 50 per cent LEV share in 2030.

VW rumoured to release entry-level MEB vehicles as of 2024