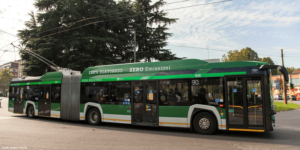 Said 2018-deal involved Solaris delivering up to 80 articulated electric buses to ATM in Milan; 30 arrived a year later. ATM now expects the remaining 50 Trollino 18 to arrive in Italy at the end of 2022. Solaris said the contract was worth about 40 million euros.

The articulated buses driving around Milan come with a 160 kW motor and 45 kWh battery, enabling about 15 kilometres in autonomous operations on stretches with no overhead line. Solaris most extended model accommodates up to 135 passengers, including 31 seats. Among other features of the vehicles destined for Milan, Solaris mentions air conditioning and an advanced video surveillance system.

“We are very glad to enjoy such successful collaboration with ATM Milano, proof of which is the extension of the contract in question by another 50 Trollino 18 trolleybuses,” said Alberto Fiore, Managing Director of Solaris Italia.

The partnership between Solaris and ATM in Milan began back in 2014. A framework agreement agreed in 2019 also provides, among other things, for the delivery of up to 250 electric buses of the shorter type Urbino 12 electric – the first ones reportedly arrived in November 2020.

In total, they have already delivered around 200 catenary and battery-electric buses to the northern Italian city, Solaris informs. As is well known, ATM plans to retire all its diesel buses by the end of 2030 and replace them with locally emission-free vehicles.