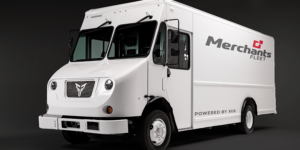 US fleet management company Merchants Fleet has entered into a strategic partnership with the electric utility vehicle manufacturer Xos to expand its range of electric vehicles. The collaboration will begin in 2022 by delivering an initial ten electric vans.

Merchants Fleet had made headlines in February with an order for 12,600 EV600 electric delivery trucks from General Motors’ BrightDrop brand. In November, the company followed up with an order for 5,400 of the smaller BrightDrop EV410 offshoot. The US fleet management company plans to procure more than 40,000 electric vehicles. The list of vehicle manufacturers contracted to manufacture vehicles for the fleet management giant will now include Xos. Given the orders of magnitude mentioned, Xos will not likely stop at the delivery of ten units.

Xos, active as Thor Trucks until 2019, is a Californian manufacturer of electric utility vehicles that presented the prototype of an electric truck at the end of 2017 and was commissioned by UPS to develop an electric delivery truck in August 2018. In August this year, FedEx ordered 120 electric trucks from Xos. These will be deployed in California, New York, New Jersey, Massachusetts and Texas and delivered in the fourth quarter of 2021 and 2022. For its order, Merchants Fleet has ordered the Xos electric delivery truck called the Stepvan.

According to the Xos homepage, the company’s ‘X-Platform 1′ enables modularly adapted vehicles – for example, in terms of wheelbase and battery. Two battery packs of 30 kWh each are integrated into the ladder frame between the axles, providing a range of 100 miles or about 160 kilometres. Optionally, two more battery packs can be mounted outside the ladder frame, doubling capacity to 120 kWh and a range of up to 200 miles (320 kilometres).

Merchants Fleet says that the delivery van is suitable for a variety of medium-duty bodies, making it an ideal solution for Merchants’ extensive portfolio of last-mile delivery customers across North America. The company describes itself as the “fastest-growing fleet management company in the country” with a wide range of financing and service options for customers who want to use but not buy vehicles. The company aims to have half of its fleet in North America electrified by 2025, and Merchants Fleet aims for the same goal for its customers’ fleets by 2030.

The delivery builds on the initial deal of only ten vehicles, which already appeared low, given Merchants’ usual order volumes. With nearly 60 now delivered, the partnership appears a success.

“We are pleased to continue delivering vehicles to Merchants Fleet and supporting the growth of their EV portfolio,” said Jessica Savage, Head of Distribution at Xos.

Hari Nayar, Vice President of Fleet Electrification and Sustainability at Merchants Fleet, confirmed the company’s commitment to decarbonising the fleet. “In 2021, we announced our $2.5 billion commitment and the reservations and orders of 40,000 electric vehicles to achieve our goal of having 50% of our Mobility fleet electric by 2025 and 50% of our clients’ fleets electric by 2030,” she said. “Partnering with innovative OEMs like Xos helps us to reach this important goal.”