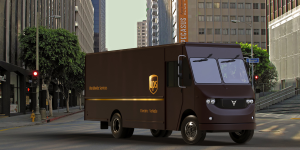 The Californian startup Thor Trucks, which made headlines back in 2017 with the presentation of an electric truck prototype will now start working with UPS. The logistics giant has hired Thor to develop an electric delivery truck.

The transporter is supposed to be fitted with Thor’s light weight batteries, which would allow for a 160 km range. UPS wants to thoroughly test the prototypes planned for this year, and decide whether to order more of the vehicles after a six month trial period.

Thor made waves in the public pool last year with the presentation of their large electric truck prototype ET-One. The concept presentation also included a prospective pricing and production schedule: As of 2019, they plan on producing it serially with a 150,000 to 250,000 dollar price tag. The vehicle will be offered with multiple variants, including one with a 160 km range, and one with 480 km range. The latter vehicle is comparable to the Tesla Semi, which has a 150,000 dollar starting price.

Thor’s core competency is the development and production of battery packs. At least, that is where everything began for the startup. This knowledge is very desirable for UPS development. The US logistics company has stated their plan to bring 9,300 low-emissions vehicles on the roads, in order to determine which type of vehicle technology is the most fitting for their business, including an analysis of BEVs, PHEVs, as well as other alternative-energy approaches, such as natural gas. In the area of e-mobility, UPS is also cooperating with Arrival, Daimler, Tesla and Workhorse.