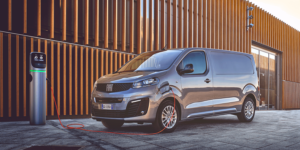 Fiat has presented the ‘New Scudo’ announced at the end of October and opened the order books for the electric transporter. After the Ducato, the New Scudo is the second commercial vehicle from Fiat Professional that is also available in an electric version.

The drive of the BEV variant New Scudo is well known from other models of the Stellantis Group: The electric drive system has an output of 100 kW and can be combined with either a 50 or 75 kWh battery. With the larger battery – which cannot be ordered with the short wheelbase of the L1 version – the WLTP range is up to 330 kilometres. The DC charging power of up to 100 kW and the charging times to 80 per cent of 30 minutes for the small battery and 45 minutes for the large battery are also in line with the familiar Stellantis models. As standard, the AC charging power is 7 kW. However, an onboard charger with 11 kW can be ordered as an option.

The bodywork also follows the familiar models: The short L1 version comes to a length of 4.60 metres, the L2 is five metres long and the L3 5.30 metres. The height of all versions is 1.90 metres, which allows the Scudo to enter most underground garages and storage rooms. The payload is up to one tonne, as is the towing capacity. The load volume corresponds exactly to that of the combustion models: depending on the body version, this is 4.6, 5.3 or 6.1 cubic metres.

The Scudo also adopts the ‘Moduwork’ system: if required, the passenger seat can be converted into a workstation for two people. Or a flap in the partition wall enlarges the load compartment, allowing the L3 version to load objects up to four metres long.

In addition to the panel van, there is also a variant for passenger transport that can be equipped with up to nine seats. Optionally, the Multicab or even the pure chassis for special bodies is also available with E-drive.

List prices for the New Scudo in Germany start at 37,900 euros net or 45,101 euros gross – at the time of publication of this article, the Scudo is not yet on the list of vehicles eligible for the German environmental bonus. Prices outside of Germany have not been announced so far.

Volvo takes the FH Electric out for Arctic testing