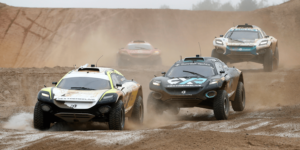 The Extreme E racing series Jura X-Prix was held in Dorset, Great Britain, on muddy tracks through the local forests, at the Bovington military training area. For Nico Rosberg’s team with Molly Taylor and Johan Kristoffersson at the wheel of the electric unit race car, a fourth-place finish in the final round was enough to maintain the championship lead by the narrowest of margins.

RXR ended up with 155 points. The X44 team of seven-time Formula 1 world champion and former Rosberg teammate Lewis Hamilton scored exactly the same number of points. X44 with Cristina Gutierrez and Sebastien Loeb at the wheel won the Jura X-Prix, it was the first victory for X44. Since RXR had won three races during the inaugural season, the title went to the German team if they tied on points.

“Molly drove outstanding this weekend and did exactly what was needed to win the championship. A great job by the whole team!” said Nico Rosberg.

RXR had gone into the finale as a big favourite after winning three races this season. With a perfect weekend – winning qualifying, winning the semifinals, winning the five extra points for the so-called Traction Award and winning the final race – X44 got the maximum out of it in Dorset. If RXR had dropped one place further in the final race, the final sprint would still have been enough to win the title.

With the final round in December, the winter break for Extreme E is very short: The electric off-road racing series will start its second season in nine weeks. The desert race in Saudi Arabia is scheduled for February 19 and 20.