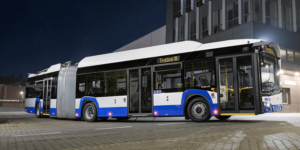 According to Solaris, in 2014 the consortium signed a framework agreement with the Budapesti Közlekedési Központ Zrt. (BKK) in 2014. This initially provided for the delivery of 24 trolleybuses and an option for 84 additional vehicles. In 2015, BKK then ordered 36 more vehicles, so there are currently 60 Trollino buses on the road in the Hungarian capital.

With the 48 trolleybuses now on order, the total number of 108 vehicles agreed in 2014 has been reached. The order is divided into 12 Trollino 12s and 36 Trollino 18s, i.e. the 18-metre articulated bus version. Solaris says that the 48 buses are to be delivered by autumn 2022.

The vehicles are Solaris’ Trollino series, which are designed as trolleybuses – the battery-electric and fuel cell-electric variants carry the model name Urbino. The Czech company Skoda Electric – which has the same origins as VW subsidiary Skoda Auto but now has different owners – is supplying the batteries and electrical equipment for the Hungarian buses. The batteries will enable the trolleybuses for Budapest to travel at least four kilometres without overhead lines.

Both models are low-floor buses. The 12-metre Trollino will be equipped with a 160 kW motor, while a 250 kW motor will be fitted in the 18-metre vehicles. Also on board are air conditioning, a video surveillance system, a reversing camera and a fire protection system. Modern LED lighting in the interior is designed to increase passenger comfort.

“Budapest is an excellent example of long-term and consistent efforts to protect the environment and take care of its residents,” says Petros Spinaris, Solaris board member for sales and after-sales. “We are very glad that our unique, zero-emission trolleybuses bolster urban transport in this beautiful, historic city. Altogether, it’s a whopping 108 vehicles!”