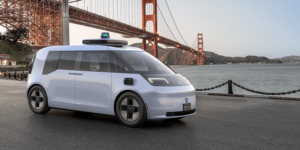 Zeekr and Waymo are working together on a purely electric and fully autonomous ride-hailing vehicle. This will be an electric minivan that will be used primarily in the USA.

According to the Geely brand and the autonomous vehicle development subsidiary of Google’s parent company Alphabet, the minivan-style electric car is being developed for use in Waymo’s autonomous ride-hailing fleet in the United States. First renderings show a futuristically designed van with counter-opening sliding doors without a B-pillar for comfortable entry and a large lidar unit on the vehicle’s roof – there are no more exterior mirrors due to the lack of a driver.

Technical data has not yet been announced, nor has the schedule. The announcement only says that Zeekr will “design and develop the vehicle on a new proprietary and open-source mobility architecture”. Whether this is a new development or Geely’s SEA platform, which is also available to third-party customers, is not specifically confirmed. Zeekr’s first production model, the 001, is based on the SEA.

Although it is a collaboration between a Chinese and US company, the development of the vehicle itself is taking place in Europe: Zeekr will design the vehicle at its CEVT (China Europe Vehicle Technology Centre) in Gothenburg, according to the release. The cabin is to be “fully configurable”, and the vehicle will be available with or without driver control if desired.

Where the vehicles will then be manufactured is not mentioned in the announcement. The only thing that is clear is that Waymo will subsequently take over the e-vehicles in the USA and only then integrate its fully autonomous driving functions.

“By becoming a strategic partner and vehicle supplier to the Waymo One fleet, we will be able to share our experience, ideals and provide our expertise in collaborating on a fully electric vehicle that fits Waymo’s requirements for this rapidly expanding segment in the global market for sustainable travel,” Zeekr CEO Andy An says.