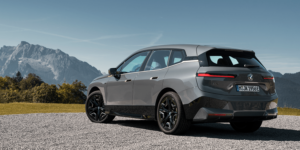 BMW is now offering its iX electric SUV in three variants in China. In addition to the iX xDrive 50, the iX M60 and the iX xDrive 40 are now also going on sale there. This means that the complete product range of the large electric SUV is now available in the important Chinese market.

At the end of November – parallel to the start of deliveries in Europe – BMW offered the iX xDrive 50 in China at a base price of 846,900 yuan. That is the equivalent of 117,500 euros. The vehicle was presented for the first time in China at the Guangzhou Auto Show.

The iX xDrive 40 has a recommended retail price of 746,900 Yuan (103,600 Euro) and is scheduled for delivery in January. Deliveries of the iX M60 in China will start in the middle of this year at prices starting at 996,900 yuan. That is 138,300 euros and thus slightly more than in Germany, where the iXM60 starts at prices from 130,200 euros. As the portal CN EV Post writes, this makes the iX series “about twice as expensive in China as the SUVs of the local luxury car manufacturer Nio”.

The drive technology of the iX xDrive 50 was quite convincing during a first test drive before the start of delivery. BMW has also incorporated a number of new developments in the assistance systems of its technology flagship. The iX M60 was officially presented at the CES in Las Vegas just a few days ago.