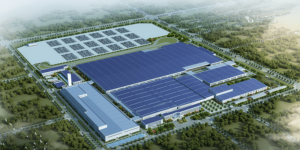 Honda has announced the construction of an all-electric car plant together with its Chinese joint venture partner Dongfeng in Wuhan. The plant in the Chinese province of Hubei will initially be designed for an annual capacity of 120,000 electric cars and is scheduled to go into operation in 2024.

Honda does not specify which models will be built in the new plant in the announcement. It only says that Dongfeng Honda Automobile will use the plant to build “a sufficient production system and capacity” “to prepare for the expansion of its EV product line-up in the coming years”.

In October 2021, Honda had unveiled its first electric SUV for the Chinese market – as well as three concepts, all of which are expected to result in production vehicles within the next five years.

The plant is to be built on an area of 630,000 square metres. Production is to be highly efficient and intelligent – anything else would also be surprising in 2022. A complete manufacturing facility is to be set up on-site, from a stamping plant and welding shop to paint shops, final assembly and quality control. Especially in the assembly area, the joint venture aims to achieve “an industry-leading level of automation”.

Dongfeng Honda Automobile currently employs 13,700 people, and the joint venture, founded in 2003, has a production capacity of 720,000 vehicles. The Japanese carmaker directly holds 40 per cent, the subsidiary Honda Motor (China) Investment another ten percent – the other half is held by Dongfeng.

In August, Honda announced that its second China joint venture will also build a new plant for electric cars and plug-in hybrids together with GAC. After commissioning, which is also planned for 2024, 120,000 cars are to be built there.

VinFast to build EV plant in Germany, batteries in the USA