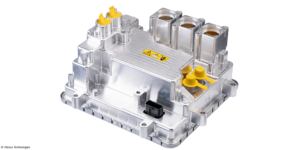 Vitesco Technologies has received a major order worth more than one billion euros from an unnamed American car manufacturer. In return, the German company will “supply millions of 800-volt inverters with silicon carbide technology for electric vehicles”.

Together with the order from the USA, Vitesco is publicising the expansion of its production activities to North America. The plan is for the high-voltage inverter, including the power module, to be produced in North America from early 2025, according to an accompanying statement. Further details on the new order and the production plans are not disclosed. The push to the west follows the already increased activities of the now independent Continental subsidiary in China.

Vitesco merely states that the order volume for electrification components in the fourth quarter of 2021 alone totalled more than two billion euros. In addition to the major order from North America, orders were also recently received from a Chinese and a Japanese car manufacturer – both with a volume of several hundred million euros. “These orders for battery electric vehicle technology, are specifically for high-voltage axle drives that are manufactured and supplied as complete systems, as well as the necessary high-voltage power electronics,” the supplier specifies.

“Vitesco Technologies was among the first automotive suppliers to focus so firmly on electric mobility,” expresses Andreas Wolf, CEO of Vitesco Technologies. “The most recent incoming orders endorse this consistent approach. We are pursuing a clear-cut plan that will drive forward our mission to deliver clean, zero-emission mobility.”

According to Thomas Stierle, member of the executive board and head of the Electrification Technology business unit at Vitesco Technologies, Vitesco’s portfolio focuses on global, scalable platforms for electrified vehicles: “This is where the growth is happening and it’s also where there is real potential for the sustainable and increasingly carbon-neutral mobility of the future.” The company is in a position to bring innovations to market quickly so that vehicle manufacturers worldwide can offer electromobility solutions that are as efficient as they are affordable.

Incidentally, Hyundai is one of the well-known customers for Vitesco’s 800-volt inverter with silicon carbide technology. A deal agreed in spring 2021 provides for deliveries with a sales volume in the three-digit million euro range for Hyundai and Kia models based on the E-GMP. With this platform, the Korean company wants to bring 800-volt technology to the mass market.

Vitesco has long been pushing the development of components for electric vehicles based on 800 volts – from DC/DC converters to battery management systems and charging systems. The automotive industry expects several advantages from 800-volt technology, such as shorter charging times and higher power output.