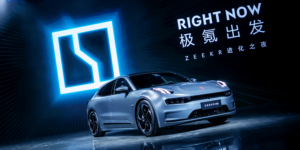 Chinese premium electric brand Zeekr, which belongs to the Geely Group, plans to offer its first model in the EU from the beginning of 2023. By 2025, the brand wants to expand its range to seven models and export a total of 100,000 vehicles.

The brand has set itself a delivery target of 70,000 electric cars for this year. According to the information, the Geely Group itself plans to sell 1.65 million vehicles across all drive types and group brands in the current year. This would represent a 24 per cent increase over total sales in 2021.

As reported, the Zeekr 001 was unveiled in April last year. Production started at the beginning of October in the eastern Chinese region of Ningbo. From the market launch at the end of October 2021 until the end of the year, sales of the vehicle model amounted to around 6,000 units, according to a media report from January. In October, 199 vehicles were sold, followed by 2,012 units in November. In December, sales amounted to 3,796 vehicles.

The nearly five-metre-long Zeekr 001 is based on the SEA platform of the Geely Holding Group and combines a dual-motor drive output of 400 kW with two battery variants of 86 or 100 kWh each. In the latter configuration, a range of 700 kilometres is said to be possible, although this is presumably the NEDC value, as is still usual in China.

Already at the presentation of the Zeekr 001 in April 2021, the manufacturer stated that the model will be delivered in other countries from 2022. Now the manufacturer’s plans in this regard seem to be taking shape.

Volkswagen prepares for ID.4 production in the USA