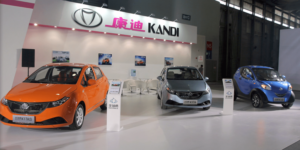 Chinese electric car manufacturer Kandi has signed a framework agreement with Hunan Hengrun Automobile to jointly produce all-electric vehicles with the associated battery swap technology. The vehicles are to go on sale under the Henghe brand name.

The concrete division of labour and the content of the cooperation will be clarified in a separate agreement, according to Kandi. The company does not give any details on the envisaged production volumes or financial scope of the framework agreement.

Hengrun specialises in the research, development, manufacture, sale and after-sales service of cars, parts and accessories. According to Kandi, Hengrun is certified to manufacture cars and commercial vehicles, including e-vehicles – meaning it has the important production licences in China.

Kandi does not give details of the vehicles in the statement. The company had unveiled plans in October 2020 to supply 300,000 electric cars with replaceable batteries for various ridesharing schemes in China.

“Our collective experience in building over 50,000 electric vehicles combined with our dozens of battery swap patents gives us a strong competitive advantage in this initiative,” said Hu Xiaoming, chairman of Kandi’s board of directors. “By leveraging our battery swap expertise and Hengrun’s vehicle production know-how, we jointly expect to create significant new benefits for customers, driving the development of China’s electric vehicle industry.”

Kandi also began mass production of its lithium iron phosphate (LFP) battery through a subsidiary in late December. The subsidiary, Jiangxi Province Huiyi New Energy Co, or Huiyi for short, manufactures the 2200mAh cells in the 18650 round cell format, with a gravimetric energy density of 161.8 Wh/kg at the cell level, according to Kandi.

Evergrande kicks off production of the Hengchi 5