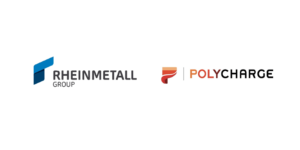 Rheinmetall has founded a joint venture with the American start-up PolyCharge America to develop, produce and market so-called DC link capacitors. These make it possible to make inverters in electric cars smaller, lighter and more heat-resistant.

DC link capacitors are a component of power electronics and are expected to bring significant advantages in terms of installation space and weight in e-cars. Rheinmetall states that PolyCharge’s technology is already playing an important role in its “Rheinmetall PowerPack” system for battery electric vehicles, which is currently under development. Additionally, “In this close operational partnership with PolyCharge, the joint venture will have exclusive rights to produce and market NanoLam capacitors in Europe.”

In the USA, there is already another cooperation: just a few weeks ago, US supplier BorgWarner signed a licence agreement with PolyCharge. BorgWarner announced in mid-December that it had secured “exclusive rights for the in-house use of PolyCharge NanoLamTM capacitors for its extensive range of inverters”.

The new joint venture Rheinmetall PolyCharge GmbH is 75 per cent owned by the German technology company and 25 per cent by PolyCharge. At the same time, Rheinmetall is acquiring 13 per cent of the American start-up. The two contracting parties do not comment on the financial volume of the transaction. Rheinmetall merely emphasises that in this constellation it is positioning itself in particular in the field of automotive supply and also with its military customers for the increasing demand for components for eMobility and Green Energy.

In future, the activities of the majority joint venture will be based at Rheinmetall’s Sensors and Actuators Division, which is driving forward the Group’s electrification strategy. “The founding of this joint venture marks another important step in our transformation strategy, enabling us to offer our customers in the automotive and industrial sector top electrification technology as we move forward,” emphasises Rene Gansauge, CEO Sensors and Actuators Division. “Advanced NanoLam technology lets us offer a product that’s substantially smaller and lighter than the conventional solutions, and which can operate at higher temperatures. This is a clear technological advantage, assuring that Rheinmetall PolyCharge is well positioned to meet the growing demand for these technologies.”

Steven Yializis, Chief Operating Officer PolyCharge America adds that the diversification of PolyCharge’s manufacturing base is critical to the transition to high volume production of NanoLam capacitors for the automotive, aerospace and industrial markets. “Rheinmetall’s technical depth, application expertise, and strong presence in Europe make it an ideal partner, allowing for rapid expansion in this important and growing market.”

The capacitors with NanoLam technology rely on a super-thin polymer dielectric and are said to be 50 per cent smaller and lighter than conventional capacitors. Manufacturer PolyCharge was founded by Sigma Technologies and has its headquarters and production site in Tucson in the US state of Arizona.