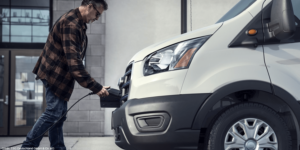 Ford has selected TSG, a German specialist for e-mobility services, to handle charging infrastructure for E-Transit clients across Europe.

From its headquarters in Germany, TSG has established a pan-European presence which reportedly led EVBox to ask the company to install its charging equipment.

For the Ford partnership at hand, TSG says it will bring its technicians on board to deliver an “integrated depot charging solution tailored specifically to Ford’s E-Transit fleet.” According to the agreement, TSG will also develop the said solution and then provide, install and maintain the charging infrastructure for Ford customers across Europe.

However, the scope of the arrangement remains open, with the partners only mentioning that from 2022, they would install a “significant number” of charging stations across Europe.

It also appears that Ford is taking another route in Europe than in the US, where the company established Ford Pro Charging only in winter last year. The new business unit delivers software and commercial infrastructure equipment to support charging and energy management. However, it remains to be seen whether Ford Pro Charging will be a consultant rather than a supplier. When announcing the news, the company also mentioned an open standard approach and partnerships with utilities.

It is unclear whether the TSG solution in Europe will have touchpoints with Ford Pro Charging or the other way around.

In Europe, Ford has put the E-Transit through real-world customer trials since summer 2021 and is about to launch the new electric van this spring.

Ford will offer the E-Transit in eight configurations, including three height and three length variants. Ford claims to have developed the 2022 model year e-Transit “with the knowledge gained from 30 million miles of customer telematics data” and is convinced that the production model will provide “the right range based on fleet requirements”. Earlier communications mentioned a range of up to 126 miles, or 203 kilometres, for the low roof version. With the middle roof (more cargo space, but less-optimal aerodynamically), it is still 116 miles (187 kilometres), with the high roof 108 miles (174 kilometres).

MFG to install HPC at 60 locations across the UK

BMW invests in smart charging that relies only on Bluetooth