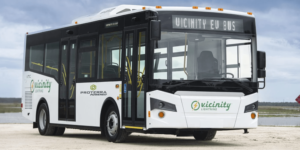 According to Proterra, the company’s battery systems will power the 28-foot Vicinity Lightning electric transit bus as well as a Vicinity commercial vehicle platform (called: strip chassis platform). Proterra says it has contractually committed to supplying Vicinity with battery systems to power at least 600 of Vicinity’s commercial electric vehicles by 2024.

The agreement between the two companies also provides for the possibility for Proterra’s battery systems to be used in Vicinity’s next-generation electric heavy-duty bus, as well as the VMC 1200 (Class 3) and VMC 1500 (Class 5).

Proterra’s batteries will be installed at Vicinity’s production facility in Ferndale, Washington State. The Proterra-powered Vicinity Lightning vehicle should enter production in the third quarter of 2022.

Vicinity Motor also reportedly entered into a strategic supply agreement with battery manufacturer Electrovaya in October last year. Electrovaya is to supply lithium-ion batteries for the Lightning electric buses and the VMC 1200 Class 3 truck. At the time, Vicinity Motor did not provide further details on the agreed delivery quantities and the financial scope of the strategic partnership.

Vicinity Motor is based in Aldergrove near Vancouver in British Columbia. The company has only borne its name since the spring of last year. Previously, the Canadian manufacturer operated under the name Grande West Transportation Group.

Proterra announced in December that it would build another production facility for battery systems for use in electric vehicles. The new plant will be built in Greer, South Carolina, near Proterra’s electric bus manufacturing facility in Greenville, and is expected to be operational in the second half of 2022.