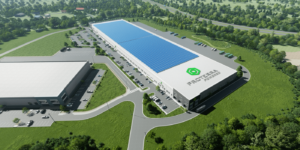 Proterra is building another production facility for battery systems for use in electric vehicles. The new plant is being built in Greer, South Carolina, near Proterra’s electric bus manufacturing facility in Greenville, and is expected to be operational in the second half of 2022.

Proterra manufactures both electric utility vehicles and battery systems for itself and third parties. The new factory at the Carolina Commerce Center in Greer is expected to add “several gigawatt-hours per year” of annual battery system production capacity.

According to Proterra, this will be the company’s third battery production facility nationwide – including the first on the US East Coast. The minimum investment is expected to be US$76 million (about €67 million), with further investment planned in the coming years to expand the plant: “From 2025, the factory is expected to offer additional production capacity for battery systems as well as the production of auxiliary systems for electric vehicles and equipment for medium and heavy-duty vehicles,” Proterra elaborates.

The battery systems produced in Greer in the future will primarily go to Proterra Powered customers, including manufacturers of delivery vehicles, industrial plants and buses. But probably not only, as an accompanying release says: “By opening the company’s first EV battery system factory on the East Coast of the United States, Proterra will bring battery production closer to its Proterra Powered customers and its own Proterra Transit electric bus manufacturing operations.” So the battery systems are also likely to find their way into the company’s own electric bus manufacturing.

Almost exactly a year ago, Proterra announced it had opened a new battery production line at its California plant in Los Angeles County. The company’s first battery factory is located in Burlingame, California. The manufacturer is sourcing the cells for the production of the systems from LG Energy Solution. According to a long-term contract agreement between the two sides, this is to remain the case in the future.

Incidentally, Proterra entered into a merger with ArcLight Clean Transition Corp. in January as part of a SPAC transaction, which was valued at 1.6 billion dollars on the stock exchange. In the spring, the company also announced two new supply agreements within a few weeks: one with US company Lightning eMotors and another with Swedish startup Volta Trucks. The latter also marked Proterra’s entry into the European truck market. Recently, an order from the Turkish commercial vehicle manufacturer Anadolu Isuzu was added.

Li-Cycle and LG enter into recycling and nickel agreement