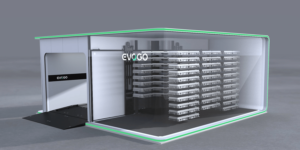 The battery swap solution includes battery blocks, quick battery swap stations and an app, according to CATL. According to Chen Weifeng, General Manager of CAES, Evogo will initially be introduced in ten Chinese cities. However, the cities and the exact launch schedule are not mentioned.

At the heart of the system are the unit batteries, which CAES calls “Choco-SEB”. SEB stands for Swapping Electric Block and “Choco” is meant to refer to the SEB’s appearance, which is meant to resemble a bar of chocolate. The “Choco-SEB” use CATL’s cell-to-pack technology, in which the cells are integrated directly into the battery pack (or in this case the block).

Thus, the gravimetric energy density is said to be 160 Wh/kg and the volumetric energy density 325 Wh/l. According to CATL, a single block should offer a range of up to 200 kilometres. The cycle used to determine this value is not specified – the NEDC or CLTC come into question, and these differ from US or EU range standards.

Each unit has an integrated and wireless battery management system (BMS). This means that each unit can manage itself and has no connections on the housing other than the positive and negative terminals.

A standard Evogo system exchange station is said to occupy the footprint of three parking spaces and can hold up to 48 Choco-SEBs. The exchange of a block should take about one minute. The Evogo system will also include other changing stations “adapted to the climate of the different regions”. CATL does not go into detail, however.

However, CATL’s statement on vehicle compatibility is surprising: the Choco-SEB is not only supposed to fit into specially designed models. “Meanwhile, the Choco-SEB is compatible with 80 per cent of global BEV platform-based vehicle models available on the market, and all BEV platform-based models to be released in the next three years globally,” the company writes.

Nevertheless, the vehicles will have to be converted for the Evogo system. The Bestune NAT will be the first model to be offered with the system.

The Choco-SEBs are suitable for vehicles from the A segment to the C segment, and the blocks can also be installed in delivery vehicles. “At the same time, the swap stations can match all vehicle models by different OEMs that use Choco-SEBs, allowing a free choice of vehicle models for battery swaps.”

With the battery swap solution, CATL aims to reduce costs for users. Instead of driving short distances in everyday life with batteries that are too large (and expensive), it should be possible to flexibly install between one and three blocks, depending on the vehicle. Via the app, the customer can choose whether they only need one block for commuting or two or three blocks for a longer distance. After returning to the city, the driver can have only one block installed again the next time the battery is changed. In addition to changing the batteries, the Choco-SEB can also be charged in the vehicle – if there is no exchange station nearby at the time.

CATL has announced the official launch of its battery exchange stations for electric cars. The first four stations have gone into operation in the Chinese city of Xiamen, the company says. The number of stations in Xiamen is expected to increase to 30 by the end of the year.

The monthly rental price is currently at least 399 yuan (57.90 euros) per block, which CATL says will be dynamically adjusted to the user’s varying conditions of use.