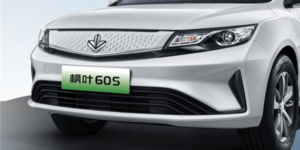 Chinese car company Geely has set up a joint venture with Lifan Technology, a vehicle manufacturer it controls, to build a battery swap ecosystem for electric cars. The first compatible car is to be launched in February.

Geely had already announced last year that it wanted to install 5,000 battery swap stations for electric cars in China by 2025. With the joint venture Chongqing Ruilan Automotive Technology Co, now registered in the southwestern Chinese city of Chongqing, the implementation is becoming concrete.

With a share capital of 600 million yuan or 83 million euros – Geely and Lifan each provide 50 per cent – Ruilan is to build up a network of battery exchange stations. Here, too, the target of 5,000 stations by 2025 is mentioned – supplemented by the specification that the network should cover more than 100 core cities.

The stations are to be based on the so-called GBRC platform, which stands for ‘Global Battery Rapid Change’, which means ambitions for expansion outside China are already anchored in the name, even if not yet concretely announced. The GBRC is supposed to be able to cover vehicles with a wheelbase between 2.70 and 3.10 metres. The body type is apparently of secondary importance; saloons, SUVs, vans and light commercial vehicles can be supplied with fresh batteries.

Lifan had already launched its first vehicle in 2006, but later ran into financial difficulties – until Geely came on board as a shareholder in the course of a corporate restructuring. Lifan already presented an electric van with a battery swapping option in May, but the 4.71-metre MPV is not the first GBRC-compatible model.

According to Chinese media reports, it will be the Maple 60S. Maple is an NEV brand also backed by Geely that focuses on affordable vehicles. The 60S looks like a conventional sedan with a long bonnet, but the closed front reveals the electric drive, which produces 100 kW. With a wheelbase of 2.70 metres, the 4.73-metre-long sedan exactly meets the minimum requirement of the battery exchange station. With its battery from Gotion High-Tech, the Maple 60S is said to have an NEDC range of 415 kilometres.

According to Maple, the model will be used primarily as a taxi or ride-hailing vehicle. Thus, the battery exchange systems could be tested in this commercial application before they are installed on a larger scale in vehicles for private customers.

Tesla tipped to open networks and up the power