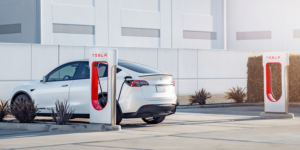 Rumour has it that Tesla plans to increase the maximum power of its third-generation Superchargers from 250 kW to 324 kW with an upgrade scheduled to start in North America later this year. According to these unconfirmed reports, Tesla will introduce a fourth generation of its fast chargers a little later.

Elon Musk already announced an increase in Supercharger peak power to 300 kW in July 2021.  The current information comes from the Twitter user, SawyerMerrit, who has published a lot about Tesla over the past few months, which then later proved to be solid information. SawyerMerrit has not named his source for the 324 kW peak power.

What is still unclear is exactly how Tesla will realise the 324 kW. So far, the V3 Superchargers and Tesla vehicles are designed for 400 volts. The 250 kW are thus achieved by a (short-term) current of 625 amperes. In Europe, the CCS standard is actually only designed for 500 amps. If it were to remain at 400 volts, 810 amps would be needed for 324 kW.

Tesla is also said to be preparing an adapter that will allow its electric cars to charge at CCS stations in the USA, as well as a “Magic Dock” that will enable foreign brands to use Superchargers there. The Magic Dock is to be tested as part of a pilot programme from the third quarter of 2022.

In the USA, Tesla relies on its own charging port for AC and DC charging, while the other US manufacturers rely on the CCS1 port. The Magic Dock would also open up the previously strictly separated charging networks in the USA. In Europe, Tesla has relied on the CCS2 standard since the market launch of the Model 3.

But it is not only in the USA that the Tesla and non-Tesla charging networks are to be further merged. According to SawyerMerritt, the opening of Superchargers for non-Tesla brands in Europe, which began in November 2021 as part of a pilot project in the Netherlands, is to be expanded in the first quarter of 2022.

On Thursday night, Tesla will present its financial figures for 2021, after which Elon Musk usually provides insights into future plans during a conference call. In the run-up to these calls, there is usually a lot of speculation about possible innovations and announcements.