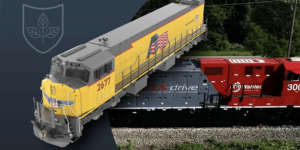 Union Pacific Railroad intends to purchase 20 battery-electric locomotives for testing in yard operations. The company expects the deal to exceed $100 million, representing the largest investment in battery-electric technology in the US. The partners are no stranger to the business either.

Union Pacific Railroad opted for technology from Progress Rail, a Caterpillar company, and Wabtec Corporation. Union Pacific says this would be the world’s largest carrier-owned battery-electric locomotive fleet in freight service. Each company is charged to deliver ten locomotives.

UP expects delivery of the first units in late 2023, with the order to be completed by late 2024. The company will deploy the locomotives in rail yards in California and Nebraska to test their performance in cold and warm weather. Testing is to help “identify the locomotives’ capabilities and challenges for broader deployment,” Union Pacific said.

Such future deployments could see the electric locomotives being used in long-haul services. Here UP hopes that by working with the locomotive manufacturers in the test phase, they may advance the battery-electric technology to cover much longer routes eventually.

While not stated specifically in today’s release, the partnership with Wabtec indicates that Union Pacific will rely on the FLXdrive developed by the Pittsburgh-based company. The latest versions aim for a seven megawatt-hour-capacity. Wabtec reportedly already holds orders from mining company’s in Australia alongside this most recent contract with Union Pacific.

For Caterpillar’s Progress Rail, the locomotive appears to have been developed for some time as well. “We are pleased to supply our EMD Joule locomotives to Union Pacific, representing our largest battery-electric locomotive order to date,” said Caterpillar Chairman and CEO Jim Umpleby.

As is the case with Wabtec, Progress Rail, too, is involved in the Australian mining projects. When announcing the deployment, the company disclosed that the EMPJoule vehicle runs on eight axles and has a 14.5-MWh battery capacity – that’s more than double that of Wabtec’s locomotive.

Still, UP estimates every ten battery-electric locomotives out in use will eliminate about 4,000 tons of carbon a year, the equivalent of removing 800 cars from the highway.

“We’re committed to actions that reduce Union Pacific’s environmental footprint as we work toward our ultimate goal of reaching net-zero emissions by 2050,” said Lance Fritz, Chairman, President and CEO of Union Pacific. “These investments will contribute to further developing this important technology and providing industry-wide benefits.”

Here, Union Pacific is collaborating with community partners. The Port of Los Angeles, for example, awarded Union Pacific a sub-award that will partially cover the cost of one battery-electric locomotive.