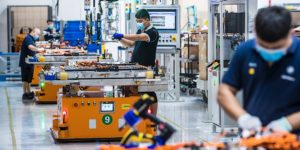 BMW has acquired a majority stake in BMW Brilliance Automotive. As announced three years ago, the Munich-based carmaker holds only 75 per cent of the shares. One of the first acts as the new majority owner is the announcement of a new plant for the joint venture.

According to BMW, the full consolidation took place directly on 11 February. BBA had previously received the necessary business licence from the Chinese authorities. The document was also issued with effect from 11 February, BMW said. This meant that the extension of the joint venture agreement until 2040, which was announced in 2018 still under Harald Krüger, became effective and with it the increase of BMW’s shareholding to 75 per cent.

“Today marks an important step, as we continue to expand our long and successful commitment to China,” said BMW CEO Oliver Zipse. “We firmly believe that our continued success in the world’s largest automotive market can only go hand in hand with the growth and further development of our BBA joint venture. The joint venture contract has been extended until 2040 and lays the foundation for sustainable business success, creating growth and prosperity in the province of Liaoning and beyond.”

BMW now holds 75 per cent of BBA, while joint venture partner Brilliance still holds 25 per cent. Previously, the shares were split exactly 50:50. The amount BMW will pay Brilliance for the 25 per cent is not disclosed in the announcement. It merely states that the payment should be completed by 22 February. According to the information from 2018, the purchase price is 3.6 billion euros.

Since BMW now holds the majority, BBA will be fully consolidated in BMW AG’s consolidated financial statements. “The revaluation of the shares already held in BBA of 50% as of 11 February 2022 will result in a positive one-off effect in the financial result of the Automobiles segment in the amount of EUR 7 to 8 billion, based on a preliminary valuation. A further specification of the one-off effect will be made in the coming weeks on the basis of BBA’s balance sheet as at 11 February 2022,” BMW writes in it’s ad-hoc announcement.

BMW further said that due to high demand, BBA’s production capacity will be expanded. “Currently, the BBA plant in the Dadong district is being comprehensively expanded. In addition, a completely new plant is being built in the Tiexi district,” BMW said. “Among other things, the BMW Group will use the additional capacity to manufacture models already produced locally at other plants and to produce further all-electric models in China.”