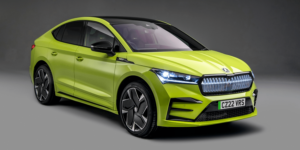 Skoda has revealed pricing and specification details for the new Enyaq Coupé iV vRS in the UK. Prices start from £51,885 and order books open on 17 February, with the first customer deliveries due for the end of July this year.

Skoda is also introducing a number of updates to its Enyaq iV model in the UK. The updated model will offer charging speeds of up to 135kW (up from 125kW) for all Enyaq iV 80 models built from January 2022. Enyaq iV 60 models will now be able to charge at speeds up to 120kW (up from 100kW).

While the order books for the ENYAQ Coupé iV vRS in the UK will open on 17 February, and the first UK deliveries expected by the end of July – Skoda says that derivatives of the ENYAQ Coupé iV will follow after the market introduction of the vRS model.