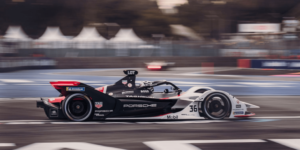 Porsche won the first race since the factory entry two years ago at the third Formula E round of the season in Mexico City – it was the first victory for a Porsche Formula race car in over 30 years. Pascal Wehrlein won for team-mate André Lotterer and two-time champion Jean-Eric Vergne.

It was not just a one-two for the Porsche 99X Electric, but a dominant one-two: the Porsche duo with the numbers 94 and 36 finished more than nine seconds ahead of Vergne in the DS Techeetah. An unusually large lead for the otherwise tight Formula E races. Lotterer refrained from a possible attack in the final phase due to a team order.

This allowed Wehrlein, who had already started from pole position, to take the victory. Venturi driver Edoardo Mortara, who had started the race as championship leader, had been leading for a while and even managed to pull away slightly. However, the Swiss used too much energy with his Mercedes power unit and his battery level was two percent below that of Wehrlein. As a result, Mortara had to slow down considerably and fell back.

The fact that Porsche would take a double victory thanks to its superior energy management had not yet become apparent during the first two races in Saudi Arabia: In the first race, it was Lotterer who had to save energy towards the end of the race and thus let his rivals pull away. The energy forecast was decisive for the race win in Mexico: Wehrlein crossed the finish line only a few seconds before the 45-minute race time expired – the race thus lasted one lap longer than some teams had calculated. But Porsche had calculated correctly: The Zuffenhausen team was the only one to assume a race distance of 40 laps right from the start, while the other teams reckoned with 39 laps – and had to adjust their strategy during the race. An extreme example here is Jaguar driver Mitch Evans, who covered the last race lap in 1:50min instead of the usual 1:10min lap times. Evans had to conserve energy.

“The team had a good plan, even if I wasn’t quite sure at the beginning whether it would work out,” says race winner Wehrlein. “After last season, we were under pressure, of course. But we always believed in ourselves and knew that we had a good package and that we would be at the front if everything came together on a weekend. That was the case today.” The carmaker’s statement also included a word from Chief Development Officer Michael Steiner, who spoke of a “high point for now” in the Formula E project.

Behind Vergne, his team-mate Antonio Felix da Costa came fourth – ahead of the aforementioned Mortara, who continues to lead the championship. Sixth was Mercedes driver Nyck de Vries, who remains second in the championship – followed by Wehrlein and Lotterer, who is tied on points.

Maximilian Günther also scored the first two points for his new employer Nissan in ninth place. The former BMW driver had not scored any points in Saudi Arabia.

Races four and five of the season will be held in Rome on 9 and 10 April.