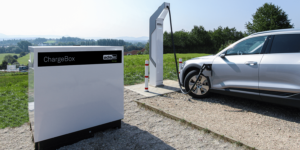 ADS-TEC Energy has received its largest single order to date in the US for its battery-boosted fast-charging solution. Infrastructure investor Smart City Capital plans to deploy more than 200 ChargeBox charging stations in the state of Florida.

This expands SCC’s initial order announced late last year. At that time, the company had ordered 20 battery-powered HPCs from ADS-TEC Energy, with an option for another 180. However, since the German supplier in today’s release talks about “more than 200 ChargeBox charging stations,” it appears that even the original option has been increased.

What is more, there is another order from SCC on the horizon: ADS-TEC Energy announced that, beyond the current program, Smart City Capital plans to install probably over another 200 ADS-TEC Energy fast-charging systems in 13 US states “in a later phase”.

The equipment on order enables charging at up to 320 kW, buffered by batteries so that the charging points can also be deployed in low-voltage grids and areas where HPC would not otherwise be possible – without grid expansion, ADS-TEC Energy points out.

This is exactly what the Americans are buying into. “No other vendor can match what ADS-TEC Energy is doing,” said Oscar Bode, CEO of Smart City Capital. “We’re proud to be bringing this first-of-its-kind ultra-high-speed charging to cities at a time when they need it to accelerate the transformation and support sustainable economic growth.”

ADS-TEC Energy established its US subsidiary in early October 2021 to strengthen sales in North America. Later that month, it signed an initial framework agreement with Smart City Capital, forming the initial order and the additional contract announced today.

According to ADS-TEC Energy, the latest acquisition comes in at a value of more than $30 million, the equivalent of about €26.4 million. Construction is scheduled to begin in the middle of the year.

Also, in recent news, ADS-TEC Energy’s US unit has appointed new executives and is searching for a location to build its first plant in North America.

ADS-TEC Energy lists on Nasdaq as “ADSE” and “ADSEW”.