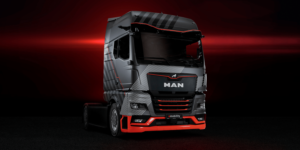 MAN Truck & Bus has announced the start of production of heavy electric trucks in Munich for the beginning of 2024 – almost a year earlier than planned. The delivery of an initial 200 units is to follow promptly. MAN also presented a near-production prototype of the new electric truck for the first time.

MAN presented the corresponding plans back in June 2021. At that time, the start of series production was mentioned for 2024. The new specification “early 2024” suggests that last year production was still planned for the last quarters of 2024. The e-truck prototype presented is based on the new MAN truck generation. However, MAN does not give any further details about the prototype in the press release.

MAN created the basis for e-trucks in large industrial quantities with the MAN eMobility Center, which opened in June last year. In an area of around 4,000 square metres, employees are testing the series production of battery-electric trucks under real conditions and are being trained in the technologies of the future. By the end of 2023, all relevant skilled workers in Munich should be qualified for the series production of electric trucks, the manufacturer said at the time.

In order to create space at the main plant in Munich for the start of series production of electric trucks, the company relocated parts of its production to Krakow, Poland, at the beginning of 2022. MAN invested around 130 million euros in the expansion of the Polish plant, with the aim of roughly tripling production capacity.

In addition to accelerating the ramp-up of electromobility, the commercial vehicle manufacturer now also wants to focus more on research in the field of hydrogen mobility. The project is supported by the state of Bavaria. Bavarian Minister-President Markus Söder and Minister of Economic Affairs Hubert Aiwanger handed over a funding commitment of 8.5 million euros for the “Bayernflotte” fleet conversion project, the company said.

As part of the project, MAN is developing a fuel cell truck together with industry partners Bosch, Faurecia and ZF. This is to be delivered to five customers in mid-2024. The companies BayWa, DB Schenker, GRESS Spedition, Rhenus Logistics and Spedition Dettendorfer will test it in real-world use for a year.

“MAN is accelerating its transformation and taking big steps towards emission-free drive systems. Our focus at MAN and in the TRATON Group is clearly on battery-electric drives. They form the basis for our heavy-duty e-trucks, which we will be launching on the market from 2024,” says Alexander Vlaskamp, CEO of MAN Truck & Bus. “Only when sufficient green hydrogen and the corresponding infrastructure are available well after 2030 do we expect to use H2 trucks in selected areas of application. That is why we are researching the topic of hydrogen and the funding from the state of Bavaria enables us to build up further expertise in the field.”