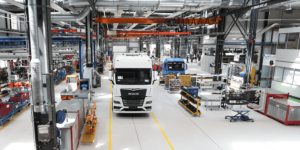 MAN plans to start series production of electric trucks at its main plant in Munich from 2024. With the MAN eMobility Center now open at the plant, the commercial vehicle manufacturer is laying the foundations for producing electric trucks in large industrial quantities.

“Electromobility is the key technology for commercial vehicle transport of the future,” says MAN CEO Andreas Tostmann. “MAN is driving this progress forward together with our customers. With the opening of the MAN eMobility Center in Munich, we are giving the starting signal to also go into series production with electric trucks in the future.”

The brand’s current electric truck, the eTGM, is currently only being produced in small series. The battery-electric Lion’s City E bus and the eTGE van, which is also fully electric, are already being built in series – both in Polish plants.

Due to the large variety of bodies, superstructures and purposes, truck production is much less automated than modern passenger car production. While it makes little difference to the assembly process in a car plant whether a tank is installed by hand at a station or a robot screws the finished battery pack under the vehicle, the effects on truck production are greater for electric vehicles.

It is precisely these processes that MAN wants to optimise by series production in 2024. “At the MAN e-mobility Center, we are building up the expertise that will allow us to go into series production of electric trucks,” says Chief Production Officer Michael Kobriger. “Here, employees of the Munich plant receive training on next-generation technologies under real-life production conditions. The training programme covers the production processes for e-trucks and how to handle high-voltage technologies safely.”

Even if electric trucks are currently slower to establish themselves on the market than electric buses – partly because of subsidy programmes – the VW brand says it expects demand from transport companies for locally emission-free electric trucks to grow in the near future – “on the one hand because of climate policy requirements and CO2 pricing, and on the other hand because it is becoming increasingly economical to operate electric vehicles”.

MAN competitor Daimler wants to start series production of the battery-electric eActros as early as 2022, to be followed in 2024 by the eActros Long Haul truck, which is also battery-electric. Other manufacturers such as DAF or Volvo Trucks also already have battery-electric trucks in their range.

MAN Truck & Bus is relocating parts of its production to Krakow in Poland, in order to make room at the main plant in Munich for the start of series production of electric trucks planned for 2024. MAN is investing around 130 million euros in the expansion of the Polish plant, which has now begun, in order to roughly triple production capacity there. According to MAN, up to 300 vehicles and cabs can be built there every day. With an additional 1,500 jobs, the plant will also employ around three times as many people after the expansion as before the conversion.

“The plant expansion is a key building block in our transformation,” says MAN CEO Alexander Vlaskamp. “Our changes in the production network make us significantly more competitive in these challenging times. In Krakow, we are creating an extremely flexible site with great variability, which will enable us to produce everything from the light to the heavy truck range on one assembly line.”