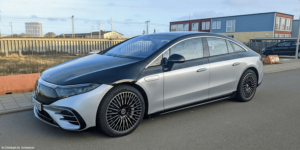 With the Mercedes EQS, Daimler is redefining automotive luxury – regardless of the drive. But to be convincing all around, the EQS has to offer more than high driving comfort, high-quality materials and a few assistants. We ask the question: What can the sedan do as an electric car?

Rolls-Royce meets Citroen: The Mercedes EQS is first-class in ride comfort. It combines smooth rolling and effective suspension with the most consistent noise insulation. Take rain, for example, the rush of water in the wheel well is barely audible. The wind also stays outside. Inside, however, where the people sit, it is quiet and safe. After two weeks and 1,173 kilometres in the Mercedes EQS 580 4MATIC, it’s evident that the brand has not only clearly defined its core. The (electric) luxury segment also has a new benchmark in the EQS.

The wealth of sophisticated solutions in the EQS is so great that we at electrive have to focus on those that stand out. After all, what is astonishing about the Mercedes EQS is not that it is particularly quiet. What’s astonishing is how well this 5.22-long behemoth steers into tight corners: precisely and snappily. This is due to the rear-axle steering, at low speeds, i.e. when parking or on winding country roads, the wheels turn in the opposite direction to the front axle. Normally at 4.5 degrees. For an extra charge of 1,547 euros, it is ten degrees as in the test car. It’s absurd how the EQS goes around corners and how small the turning circle is at 10.9 meters.

At high speeds, the rear wheels can steer in parallel. Nothing is disturbing about this. The EQS lies full and heavy (EU value in the vehicle registration document: 2,585 kg) and long (wheelbase: 3.21 meters) on the road. A flying and vibration-free carpet. But what remains of the 107.8-kilowatt-hours of energy content when the Mercedes is driven properly, that is on the German Autobahn? We drove the EQS 300 kilometres on the A24 motorway from Hamburg to Berlin and back.

The outward journey was the cruising scenario. Cruise control on target speed, lush winter tires, dry road and a bit of tailwind. It’s simply amazing how comfortable this electric car is. The driving assistance systems make a fundamental contribution – more on that in a moment – whose greatest strength is being unnoticeable when they are at work. The onboard computer indicated a power consumption of 25.8 kWh / 100 km, which arithmetically results in a range of 418 km. That is slightly more than we achieved with a Tesla Model 3 Long Range (361 km).

The absolute power consumption value could be sobering for those who expect similar numbers as a Tesla Model 3. After all, the EQS is the most aerodynamic car in the world with a CW value of 0.20, and the frontal area of 2.51 square meters (cA value: 0.5) hardly counters that. If you want to be a few more watt-hours more economical than in the 580 4MATIC, you should go for the EQS 450+. It only has rear-wheel drive and narrower tires. Ultimately, you must understand that you are free to compare the EQS with a Model 3 or an original Ioniq. But it would be wrong to equate them because the competitors are the Porsche Taycan, the Audi e-tron GT, the upcoming BMW 7 Series and the Tesla Model S if it is available again; electric cars with a similar format in the same segment.

The return trip from Berlin to Hamburg was the hard way. The headwind had increased to force 5 to 6. Again and again, there were short, heavy downpours. And from Mecklenburg-Western Pomerania, the Brandenburg speed limit falls. As the speed increases, so does the hunger for energy.

The sheer headwind and sometimes great wetness on the road drove the power consumption to 29.7 kWh / 100 at the target speed. As soon as possible, the EQS was moved briskly, which goes very confidently with 385 kW of power and 855 Newton meters of torque. With speedometer readings of 150 to 200 km/h, a real average of 160 km/h was achieved on a 30-kilometre stretch. This sample resulted in power consumption of 38.4 kWh / 100 km. The maximum value in the test. So, it would end after 281 km. The lowest consumption of 15.4 kWh / 100 km was achieved around the city of Hamburg. This corresponds to a range of 700 kilometres, which is significantly more than the 549 km according to WLTP noted in the vehicle registration document.

No one should be under the illusion that the Mercedes EQS can match an S-Class in terms of operating range. Frequent drivers will continue to choose the diesel engine. Nevertheless, what sets the EQS apart is its large battery capacity. It is complemented by – finally! – a perfectly functioning route planner, including preconditioning of the battery.

Convenience en route is thus Tesla-like. Enter the destination via voice control, have the route calculated with charging stops and SOC forecast, and you’re done. Those who want a stopover because they have a favourite charging park – This is even easier than with Tesla. What EQS can only do with Ionity so far is Plug & Charge. Nevertheless, it is clear that the latest generation of German electric cars no longer lags behind Tesla in terms of quality, which means that one of the last unique selling points of the Californian brand is no longer valid.

The charging power of the Mercedes EQS is, in fact, limited to 200 kW on the DC side due to the battery system with 400 volts voltage because the installed pillars offer a maximum of 500 amps. However, the charging curve was comprehensible at all times, even at single-digit temperatures – the preconditioning works as it should. On the AC side, the optional 22 kW charger is a valuable thing. If you can afford an EQS, you should go with that.

Of course, several paragraphs could now be written about the spaciousness (generous and easy to load thanks to the tailgate), the build quality (top) or the sound of the Burmester system in the Edition One trim (fine). It is more important to concentrate on what was particularly striking, on what stood out.

And so are the driving assistance systems and the Digital Light. The lane departure warning and the speed detection and takeover function so discreetly that unbiased drivers can hardly notice them. Automatic recuperation when driving without ACC activated is also absolutely exemplary and a clear safety gain. It’s nice to see that the EQS not only decelerates on its own for drivers in front but also when a pedestrian crosses the crosswalk. And the head-up display, which Mercedes makes far less of a fuss about than Volkswagen’s similarly designed augmented reality, works so smoothly and unobtrusively that it also has to be considered top class.

A strong plus for safety is the Digital Light, which unfortunately has to be paid for. You simply drive through the night with two fat beamers at the front of the car. Oncoming drivers are precisely cut out and thus not dazzled. And the gantries on the highway are illuminated separately, which is a really good thing at night and in the rain.

As usual with press cars, virtually all extras were present, pushing the gross list price to a whopping 200,152.05 euros. Our choice would be to go for the EQS 450+, which means little equipment, but the large battery with the 10-degree rear-axle steering and the Advanced Plus package (Digital Light, partial automation), forgoing the hyper screen and wide tires. Alternatively, the EQS-AMG full cabin right away. Anything goes.

Maybe we can also drive the Tesla Model S Refresh at some point. Gladly with a yoke steering wheel. However, as things stand, there is neither a price nor a delivery date. So the EQS temporarily stands alone in the electric luxury class, and perhaps the next available competitor will not be the Model S but the BMW 7 Series. The coordinates have clearly shifted in Mercedes’ favour.