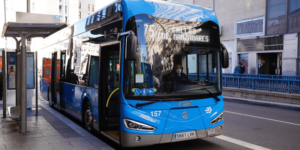 In the Spanish capital Madrid, the municipal transport company EMT has put another electric bus line into operation. Five electric buses from Irizar are used on Line 75. It is now the 16th line in Madrid to be served exclusively by electric buses.

There are no changes in the timetable with the introduction of the electric buses: As EMT Madrid states, the buses on line 75 run at intervals of nine to 15 minutes on weekdays between 6 a.m. and 9 p.m., and later every 13 to 20 minutes until the end of service. Line 75 runs between Callao and Colonia Manzanares.

The first line to run exclusively on electric buses was inaugurated by EMT Madrid in February 2020. Since then, numerous other lines have been converted, most recently lines 81 (Oporto-Hospital 2 de Octubre) and 41 (Atocha-Colonia Manzanares).

The announcement does not say which buses will be used on line 75. In recent years, EMT Madrid had placed several orders with the Spanish manufacturer Irizar, but also with the Chinese manufacturer BYD. At least one Irizar vehicle can be seen in the published press photo.

Zity car-sharing to expand to Lyon in March