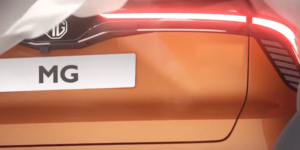 British SAIC brand MG Motor has announced a new electric model to be unveiled in the fourth quarter of this year. It will be a 4.3-meter hatchback called MG4, which is expected to compete with the VW ID.3, among others.

A video released by the company on Twitter shows a (partially) shrouded rendering of the MG4. The car cannot be seen in its entirety in the teaser video, but some details can. Rims and taillights look modern, the rear is characterized by a continuous strip of lights.

Apart from the length of 4.30 meters (ID.3: 4.26 meters), MG does not provide any details on technical data. In its current models, such as the revised ZS EV compact SUV and the MG5 Electric compact station wagon (which will be launched in Europe in March), the SAIC brand relies on both NMC and LFP batteries.

The British magazine Autocar speculates that the MG4 should be technically “largely identical” to the current version of the MG5 Electric. MG will initially offer the station wagon with a 61.1 kWh NMC battery for a WLTP range of 400 kilometres. The standard version with a 50.3 kWh LFP battery (320 WLTP kilometres) is to follow later. Depending on the battery, the drive power is between 115 and 130 kW. The same LFP battery is offered in the ZS EV, but the NMC battery of the long-range model comes to 70 kWh.

The AC charging power is 11 kW regardless of the installed battery. In addition, both batteries are capable of charging with up to 87 kW at a DC charging station. Charging from five to 80 per cent takes around 40 minutes – which corresponds to an average charging power of 69 kW for the large battery.

In terms of price, the MG5 Electric could also be an indication of the MG4, which is also likely to remain slightly below the prices for the e-combi due to the smaller code number in the model name. The latter will be offered in Germany at prices starting at 35,490 euros with the LFP battery and 38,490 euros with the NMC battery – both prices are before deducting the subsidy.