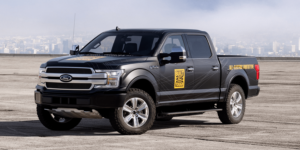 The City Council of Houston, Texas, has approved purchasing 97 battery electric vehicles. The new EVs will replace ICE vehicles ageing out of the official fleet. The Houston Climate Action Plan aims to convert all non-emergency, light-duty municipal vehicles to electric by 2030.

“With today’s purchase approval, we more than triple the number of EVs in our municipal fleet!” said Mayor Sylvester Turner. He also admitted that they still had “a long way to go” to reach the climate targets but were “determined to continue leading by example.”

The new purchase will add to the 40 battery-electric vehicles already in the fleet. However, the City of Houston did not detail the type and make of the new EVs but mentioned pickup trucks.

The Fleet Management Department is spearheading the City’s EV initiative. In addition, they partnered with Evolve Houston, a self-described “coalition of sustainability-minded civic, business, and academic leaders who seek to accelerate clean transportation through electrification.” For Houston, they apply life cycle analysis and optimisation modelling to determine the financial and environmental impacts of EVs and associated infrastructure.

Perhaps unsurprisingly, their study saw significant savings from electrifying the municipal fleet, especially as BEV prices continue to decrease. For example, the purchase price of battery-electric pickups is only 7% ($2,774) greater than a similarly equipped gasoline pickup.

Director of Fleet Management Gary Glasscock added, “Over an 8-year life, each EV is expected to save the City approximately $16,000 in the total cost of operation and reduce tailpipe and upstream greenhouse gas emissions by 25 tons compared to a conventional, gasoline-powered vehicle.”

The purchased electric vehicles will be deployed throughout the City departments, including the police and fire departments. The City and Evolve Houston will collect data from operating the EVs across the city and in different use cases to optimise future deployments.

The City of Houston is already placing EV charging infrastructure at some of its facilities to support the additional EVs. However, delivery is set no sooner than Spring 2023 due to supply chain issues, so the Mayor’s office.