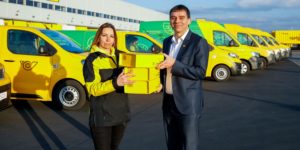 From now on, the Austrian Post will only purchase zero-emission vehicles. Originally, this step was to take place in 2023, but due to the progress and developments in the vehicle market, the procurement of vehicles with combustion engines is already being discontinued.

“With immediate effect, we are no longer creating vehicles with combustion engines for delivery, instead we are investing over 80 million euros in electric vehicles and the charging infrastructure in 2022 and 2023,” says Peter Umundum, Board Member for Parcel & Logistics. “The advances and developments in the vehicle market will enable us to significantly accelerate the ramp-up of our e-fleet.”

The first tranche of new electric vehicles has now been put into operation. With around 2,500 EVs, including about 1,100 e-bikes, e-cargo bikes, electric mopeds and e-trikes as well as almost 1,400 electric transporters, Austrian Post already operates the largest electric fleet in the country. By 2030, it aims to deliver all parcels, letters, print media and advertising mail throughout Austria without emissions.

The fleet uses a wide variety of electric models such as the Renault Kangoo Z.E. or similar-sized vans from Citroën, Opel or Nissan. For the larger vans with up to eleven cubic metres of loading space, Austrian Post uses the MAN eTGE or Mercedes eSprinter. The Post has already begun running a purely electric fleet in Graz since August 2021.

In March last year, Austria’s mail service Austrian Post AG already said it was aiming to decarbonise all last-mile deliveries by 2030. Now, all vehicles are to be included in this target and not a single fossil-fuelled vehicle will be purchased henceforth. The target seems very feasible when taken into account that, not only is Austrian Post very well prepared, as mentioned above, but the Austrian government also has a non-binding plan that by 2030 at the latest, it will only newly register zero-emission passenger cars, two-wheelers, light commercial vehicles and heavier commercial vehicles. In view of such an environment, the Austrian Post’s ambitions seem very doable.