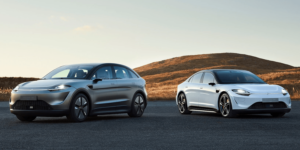 Sony and Honda are planning a joint venture to develop and sell electric cars. The partners aim to launch their JV this year, with sales of the first electric model planned for 2025.

The two Japanese companies have stated that the new company will develop and sell the vehicle. Honda said they would produce the car, although such issues have not yet been resolved. Honda writes: “The two companies will proceed with negotiations toward executing various definitive binding agreements, including a joint development agreement and a joint venture agreement, with a goal of establishing the New Company within 2022, subject to execution of the definitive agreements and relevant regulatory approvals.” Financial details, a possible corporate headquarters or who will lead the joint venture are unknown.

Sony unveiled its second electric car prototype earlier this year and announced it was looking into entering the e-car market. That will now likely happen, assuming that Sony reaches a final agreement in the joint venture. However, the joint venture, which has yet to be named, will not own and operate any production facilities itself. Therefore, Honda will “probably” build the vehicles, but the decision is not yet final.

On the other hand, Honda’s expectations of Sony are clear: “It is expected that a mobility service platform will be developed by Sony and made available for the New Company,” the automobile manufacturer added.

According to Sony CEO Kenichiro Yoshida’s statement, the company wants to help develop mobility focused on “safety, entertainment and adaptability.” Sony’s Purpose is to ‘fill the world with emotion through the power of creativity and technology,” Yoshida said.

Honda CEO Toshihiro Mibe added the new company aims “to stand at the forefront of innovation, evolution, and expansion of mobility around the world by taking a broad and ambitious approach to creating value that exceeds the expectations and imagination of customers.” He explained, “We will do so by leveraging Honda’s cutting-edge technology and know-how in relation to the environment and safety while aligning the technological assets of both companies.”

The joint venture between Sony and Honda for electric cars and mobility services announced in March is becoming more concrete. It will be called Sony Honda Mobility, will be based in Tokyo and will be owned equally by both companies with an initial total investment of 10 billion yen (about 75 million US dollars). The official establishment of the joint venture is targeted for later this year. In 2025, Sony Honda Mobility is expected to start selling electric cars and providing mobility services.

According to the latest announcement, Honda manager Yasuhide Mizuno will lead the joint venture as CEO. COO Izumi Kawanishi, on the other hand, comes from Sony. The other four board members also come half from each of the two shareholders, meaning that neither party has a majority.

Volkswagen is realigning their technical development