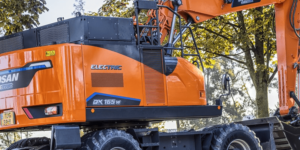 Webasto has joined with the Dutch start-up Electric Construction Equipment (E.C.E) in the electrification of construction machinery. The two partners are planning the conversion of two excavator models for which Webasto is to supply an exchangeable battery package.

This battery pack, the so-called PowerBox, was designed by Webasto “based on the detailed specifications of E.C.E”, according to the company. E.C.E. then installs the PowerBox in two excavator models, specifically the Doosan DX165W Electric and Doosan DX300LC Electric.

The excavators have a capacity of 16.5 and 30 tonnes respectively. E.C.E does not yet give many details about the vehicles on its website – but some of the information differs slightly from the Webasto information. For example, E.C.E. states that the DX165W uses two “Smart Energy Packs”, the DX300LC three.

According to Webasto, these excavators are each equipped with four standard battery systems in a separate and exchangeable box, resulting in a total energy content of 140 kWh. Each package has its own heating and cooling system. All packs are interconnected via Webasto’s Vehicle Interface Box (VIB), which combines the interface to the vehicle, the power distributor, BMS and fuses in one housing.

The battery packs are interconnected in such a way that the system reaches a voltage of 800 volts. “The excavators are available for the whole working day, just like before, for a total of eight hours. At the same time, we made sure that they can perform the same tasks and do so perfectly at -10 to 35 degrees Celsius,” explains Sebastian Fuchs, Product Manager Batteries at Webasto. “The swappable BowerBoxes can also be taken to a charging point and recharged there. This is of value in case there is no charging station on a construction site or in a natural area.”

According to Webasto, the cooperation with E.C.E will go beyond the two excavators in the future. “In the long term, E.C.E aims to electrify all its vehicles that are used on a construction site. The PowerBoxes can then also serve as a substitute for generators and supply power to tools,” Webasto writes.