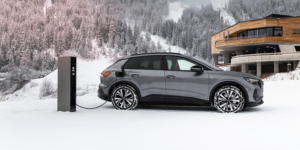 Most electric car drivers notice it every winter: Performance at the fast-charging stations drops with the temperatures. Christoph M. Schwarzer and analysts from P3 Automotive have compiled a detailed report to see how cold affects battery cells and what this sensitivity means.

The automotive industry has made a promise: Battery electric cars, abbreviated BEV for Battery Electric Vehicle, should be able to charge faster and faster. The better that works, the less critical the actual range will be. That’s how the Hyundai Ioniq 5 had us euphoric when it came out. Based on the 800-Volt E-GMP platform, Hyundai claimed it would take no more than 18 minutes to fill the battery from 10 to 80 per cent SOC. At peak, over 200 kilowatts of charging power were promised. However, during the real-life test in late October, only a quarter of the ideal charging curve could be called up at times. Diagnosis: too cold. And the Hyundai is by no means alone with this symptom. In fact, this behaviour can be observed in varying degrees in almost all BEVs.

We set out searching for facts and found the battery experts at P3 Automotive.

In particular, P3 looked at behaviour and performance data of battery cells to investigate how these were affected by cold weather. Hardly anyone knows chemistry that well. We wanted to clarify what actually happens to battery cells at low temperatures? What effects does charging have? And what conclusions follow from this – what needs to be corrected and compensated for by the components mentioned above if the cells show poor performance data in cold weather conditions?

The bottom line: according to P3’s paper, it is “essential” that battery systems be automatically preheated at cold temperatures before fast-charging. The optimal starting temperature is between 20 and 30 degrees Celsius, said P3. As soon as a charging process starts, a battery cell heats up. If it is icy, for example, at zero degrees Celsius, it has a very high internal resistance, and much of the charging power escapes as heat, required to bring the cell to charging temperature.

In electric vehicles, the maximum charging power depends on the perfect interaction of all the battery system’s components: The battery cells and their chemical composition, the temperature control system for cooling and heating the battery cells, the battery housing for insulation against heat and cold, the battery management system as the central control unit for performance control during charging and discharging, and the vehicle interface for optimizing the operating strategy for recuperation, preconditioning and other functions.

If it is too cold, it inhibits the initial charging performance – a shortfall that cannot be made up for in the course. Conversely, the battery heats up when it absorbs electrical energy, so the temperature control system in the vehicle must actively cool the batteries even on hot days because batteries age faster at over 45 degrees Celsius.

In both cases, outside the ideal temperature window (20-30 degrees), the charging power is reduced to protect the battery system from ageing and wear, referred to in technical jargon as derating.

Effective thermal management and preconditioning of the battery system at low temperatures is a prerequisite for ideal performance at the fast-charging station and, subsequently, the well-being of users.

Preconditioning is crucial for durability.

At least as important, and this is the second elementary result of P3’s research, is preheating for the cyclic endurance of the battery: a non-tempered cell ages four times (!) as fast during the charge and discharge cycles at below five degrees Celsius as one that is charged and discharged at high heat. This is the result of so-called lithium plating, i.e. the deposition of metallic lithium on the negative electrode. As a result of plating, the lithium ions are no longer available for charge and discharge transport, which, P3 says, can lead to a “reduction in the capacity of 50 per cent or higher and an exponential reduction in life.” In addition, as lithium plating increases, so-called dendrites can form, increasing the risk of short-circuiting and fire hazards.

The excellent battery takes care of itself. This insight is not new. However, it is becoming ever clearer how important it is, at extreme temperatures, to combine perfect route planning with automatic preconditioning and gentle battery management on the one hand – i.e. the software – and the necessary hardware on the other.

Here are several concrete examples: The original role model for the route planner with preconditioning was Tesla. In the meantime, manufacturers such as BMW, Mercedes and Porsche have followed suit, and Hyundai has also announced a revision of the Ioniq 5. Toyota, on the other hand, reports that the SUV bZ4X (pronounced “bee zee four cross”) will have a heat pump as standard to “bring the high-voltage battery up to temperature” – and not primarily to reduce power consumption when heating the interior. From their experience with hybrid cars, Japan probably knows better than they would like to admit to the outside world how to control battery systems reliably.

Unfortunately, it’s evident that elaborate software and hardware cost money, resulting in shorter supply in the lower-priced vehicle segments. In other words, exactly where the battery cost hurts most anyway, and where it is not possible to build a generous gross buffer on top of the net capacity for precisely these cost reasons. There are grounds for concern that practicality and durability will suffer in these segments.

Back to the P3 paper and the primary scientific finding:

Conclusion: To avoid putting off electric car drivers, the industry must install a route planner with automatic preconditioning of the battery system even in the lowest-priced BEV. This is the only way to comfortably cover longer distances without damaging the battery in cold temperatures. This means more than just software because active heating and cooling are not yet a standard in many low-priced BEVs. This hardware is also the prerequisite for ensuring the durability of the battery cells. If this all is not combined, e-mobility’s reputation itself will suffer.

Jaguar to use I-Pace batteries in 2nd Life project